Adventurous resident finds part of the world's a stage 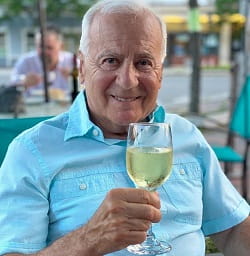 Vincent Fraumeni has happily moved from one career to another as opportunities arose. From bartender to liquor salesman to restaurant owner to boxing commissioner, he has followed a slightly winding path, willing to take chances as they came along.

As a bonus, the longtime Arlington resident has met celebrities: when he tended bar in a Cambridge restaurant, actor Tommy Lee Jones was the waiter. During the years he owned Vincent’s, an Italian restaurant in Harvard Square, he dined with author Robert Parker many days for lunch.

Now, in his latest career, he has been in movies, on set with such movie stars as Christian Bale and Amy Adams. At age 78, he says, “I’m having fun.”

Not that he wasn’t having fun before. While he was a liquor salesman, two of his clients were the famed Harvard Square restaurants Ferdinand’s and the Ha’Penny. When they went bankrupt, he bought them and transformed Ferdinand's into Vincent’s.

A lot of Italian restaurants were basically red sauce and pasta. I decided to serve regional Italian food from Northern Italy, the countryside and the seacoast.” -- Fraumeni

“A lot of Italian restaurants were basically red sauce and pasta,” he said. “I decided to serve regional Italian food from Northern Italy, the countryside and the seacoast.” The restaurant’s name was made when Boston Globe restaurant critic Robert Levey gave it a glowing review. Among its patrons were Morley Safer, who one night was joined by Walter Cronkite. Actor Ken Howard, who starred in “The White Shadow,” also dined there as did the president of CBS.

Fraumeni loved the hustle and bustle of owning and working in a restaurant: greeting customers, making sure they were all taken care of and that they enjoyed the food and had a good time. Although he credits a terrific chef for the excellent food, he sometimes did some of the cooking himself.

“We offered delicious food and cooked everything on the premises. We always used fresh ingredients and never used heat lamps or fryolators. We even introduced a few items to the area, such as tiramisu and pasta puttanesca,” he said.

His other restaurant venture was as the developer of The Brewery Exchange in Lowell, a 40,000-square-foot complex housing five bars, several restaurants and a brewery. Fraumeni took care with the former brick mill building, carefully restoring the structure and refinishing the old wooden floors with their equipment markings. At the same time, he served as a state boxing commissioner and was familiar with the boxing scene in Lowell.

One night he got a call from former boxer “Irish” Micky Ward asking if he could borrow his yellow boxing gloves. He said, “Sure.” The gloves were to be used in a movie about Ward called “The Fighter.” Two weeks later, he got another call: Would he sit ringside for some still shots they were making for the movie? “Sure,” he said again. The next thing he knew, he was being asked to audition to be in the film. He ended up not getting a speaking part but thoroughly enjoyed himself.

That’s how Fraumeni found himself taking acting and improvisation lessons. He is now a member of the Screen Actors Guild, with about a dozen movies and commercials to his credit, including “The Judge,” with Robert Duvall, and “Heat,” with Sandra Bullock and Melissa McCarthy.

The acting lessons were an emotional experience, he said, recalling how the teacher put him through a scene in which he was supposed to watch a baby grow into a girl and then a young woman about to be married. The father of a son and daughter, Fraumeni found himself growing genuinely emotional as he acted out the scene.

“The teacher told me ‘You know, I got out of you exactly what I wanted. You’ll be fine.”

He went on to appear as an extra in “American Hustle,” “Chappaquiddick” and “The Judge,” among other movies.

It’s been fun -- except for the time he acknowledges he “screwed up” while filming “Heat,” with McCarthy and Bullock.

“The director called, “Camera, lights, rolling,’” he recalled. “Everything’s going good. I was in a scene in a diner at a table with a woman supposed to be my wife. The two stars are sitting down, and a guy falls and starts choking. Both stars run over, and they’re kneeling and facing me. Bullock says, ‘This guy is really choking. Can you help us? I’m serious; we’ve gotta do something.”

“Oh God,” was Fraumeni’s reply. He knew CPR, so he knelt down and said they had to get the man’s airways open. “I thought the guy was really choking,” Fraumeni recalled. “I’m looking at the director, and his jaw dropped. Then he says, “Let’s take five minutes.’”

It turned out that no one had explained the scene to Fraumeni or told him what everyone’s lines would be, so he thought it was all real.

The mix-up didn’t end his career. One of his other movies is “Labor Day,”  with Melissa McCarthy, made about a year after “Heat.” “She looked up at me,” he recalled, “and she had a puzzled look on her face, like ‘How do I know that guy?’”

Much as he is enjoying his new career, the restaurant business remains his first love. “Nothing,” he said, “was more exciting than being in the kitchen at Vincent’s. The cross section of people who came into the restaurant was incredible -- people from Harvard, athletes. It was wonderful and it was fun being in my kitchen. We were always doing something creative.”

Married to Ellen, a nurse, it is Fraumeni who is the cook in the household. “I’m particular,” he explained, chuckling.