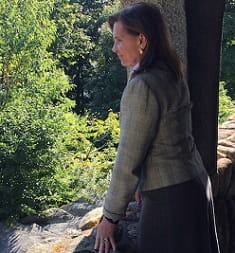 Growing up, many of us have had times when we did not see eye to eye with our fathers, but how many of have filed a lawsuit against the "town fathers"? Jane Morgan Barry did.

In a newly published memoir, Against My Father's Will (Back Shore, 2019), Barry, a graduate of Arlington High School, describes how she has been a "disruptor."

She told YourArlington that highlighting her contentious relationship with her father was her lawsuit alleging sexism both is her local government and in a country club in Madison, Wis. – “an act Dad couldn’t understand or appreciate.”

She is judicious in recalling their differences: “That antipathy did exist, but I loved and respected my father and miss him to this day. “

In the title, “Will” is a double entendre, she explained, indicating “not only my assertion of my own will in my life but also my rejection of his final will and testament.”

The memoir, Barry's first book, goes beyond opposition. She says it is “more about the emotional struggle to love myself enough to overcome the feelings of guilt, of treachery, I experienced when I asserted my own priorities over my father’s and the “town fathers’.”

Growing up in Arlington

Here her background growing up in Arlington comes into play: “Raised as I was in the milieu of the 1950s and 1960s, to establish my independence, to declare my equality as an adult vis a vis my father and men in general, represented a herculean challenge.”

In her early years – late 1940s to to late 1950s -- she lived on the top floor of a two-unit on Bow Street. When she was in the fifth grade at Peirce School, her parents bought a house at the top of Newland Road. After that, she went to Jr. High West, now Ottoson Middle School, named after the principal. She was in class with his daughter, Ann. A member of the AHS Class of 1964, she was a cheerleader.

Now 73 and living on the North Shore, Barry describes herself this way: “I was a 'good girl.' I prided myself on that, so when I went to Smith College, the alma mater of such influential, free-thinking, feminists as Gloria Steinem and Betty Friedan, and realized that I could and should claim my adulthood, claim my equality, it was not only the outside world I had to battle, but almost more significantly, my self-concept as a good girl, 'an eternal daughter.'

“To confront sexism required confronting an inner voice that relentlessly haunted me – and to a degree always will. Intellectual knowledge never completely erases early, inculcated feelings.”

Feminist work yet to do

In view of a life spanning a number of flavors of feminism, YourArlington asked: What is the main work women still facing women? Barry responded in some detail:

First, she urged passage of the Equal Rights Amendment, a proposed amendment to the U.S. Constitution designed to guarantee equal legal rights for all American citizens regardless of sex.

“White, black, brown and yellow men were included ---at least linguistically -- in the Constitution from the very beginning.  Women (black, white, brown or yellow) still are not.

“We like to say that the words 'All men are created equal' includes women, but it didn’t (we couldn’t even vote till the 20th century) … and it doesn’t even now, because that’s not what it says. Women are separate beings and should be treated as equal -- separate, but equal.”

She offered a suggestion: “If the Constitution substituted 'All women are created equal' and eliminated the words 'all men are created equal,' there would be a hue and cry… as well there should be. That is because the word 'women' doesn’t include men.

“The word 'men' has been touted to “cover” women, while the word “women” has never been conceived to include or cover men.  Implicit in this linguistic distinction, this linguistic inequality, is the secondary, subordinate position of women in society.”

Calling it pervasive, she cited an example: “We accept the term “basketball” for the men’s sport, but have to specify “women’s basketball” when referring to members of another gender who also play the game.

She wonders why and answers: “Because implicit is the idea that basketball is men’s territory, unless the 'subset' of women’s is specifically named.  This is a constant implication of lower status, subtle and insidious to the female soul.”

Her blunt conclusion: “Equality is equal … not almost equal. Almost equal means unequal. We women need to insist: No more subordination, no exceptions to equality.

“I say all of this as a former cheerleader for AHS, co-captain of an all-female cheering squad, cheering only for the males. It’s an emotional hurdle to cheer for myself, for ourselves as women, but I have come to that.”

Her pleas remind us that the 19th Amendment, assuring that women cannot be denied the vote, was adopted a century ago this past May.

For more information about her memoir, find out more at  janemorganbarry.com.