Arlington isn’t exactly Hollywood East, yet it has a thriving community of people who work on major features, TV programs and commercials.

Its members have rubbed shoulders with some big names and casually mention working with movie stars and celebrities.

Ben Affleck has waved a hello of recognition to Claire Folger, a still photographer on movie sets.

Florence Pugh, who played Amy in “Little Women,” relied on Taryn Walsh, a costumer, to help with all those buttons on her 19th-century costumes. 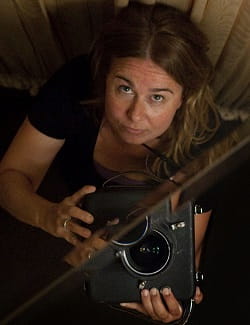 “We’re your neighbors, we’re not special; we’re trying to make a living."

“You may not realize how many people in Arlington work in the film business,” said Folger.  “We’re your neighbors, we’re not special; we’re trying to make a living. When a movie comes in, not everyone is from out of town and takes their money back to California. A lot of us rely on films and TV work, and we also pay mortgages and have families. You see us at Quebrada and at Walgreen’s”

Now all three, along with their colleagues, are eagerly waiting to see how the film industry responds to the coronavirus. How can you shoot a movie, they wonder, and keep socially distant when you work in close quarters for sometimes 14 or 16 hours a day?

Folger is on a movie set the entire time, shooting photographs for publicity and marketing purposes while seated next to the main camera. If you’ve read a movie review or seen Netflix, the photo you see may have been shot by her. Among her credits are the recent “Knives Out,” “Manchester by the Sea,”  “Argo” and “Richard Jewell.” See more at her website >> 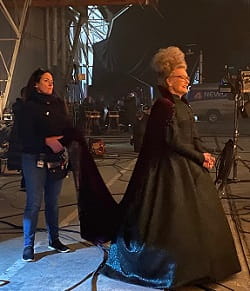 Preparing a scene in "Frills" with actress Jane Curtin.

Walsh is a costumer, taking care of the wardrobe and making sure actors have what they need for each scene. She keeps track of continuity. If a woman is filmed leaving a hotel wearing a hat tilted to the left, Walsh makes sure the hat is tilted the same way when the next scene is filmed, which may be days or weeks later. She has worked with Steve Carrell, Rosie O’Donnell and Denzel Washington, among others.

Janke is a camera assistant whose movies include “Gone Baby Gone” as well as the recent Super Bowl commercial featuring local notables who talk about “smart cars”  with a Boston accent so that John Krasinsky, Rachel Dratch, Chris Evans and even David Ortiz end up saying “smaht cahs.”

“With the pandemic, we are shut down,” she said. “I was working on a commercial for Frontier Communications, which we finished, but then I had a job the following week, and we were just on hold. It was like the Rapture; we were all suspended. I haven’t worked since March 12.”

All three belong to unions, which are trying to work out protocols to keep workers safe, but there are challenges. “Who is going to put on an actor’s makeup or do her hair?” asked Janke. “In my department, what happens when I change the lens or put in a new filter? Does everything stop and people step away? There’s not an actor in Hollywood right now who is going to kiss another actor.”

Janke said another issue is the care and feeding of the crew. “When they were shooting the mini-series “Defending Jacob” in Belmont, they had actors’ trucks and makeup trucks, and they rented the parking lot from St. Camillus. It’s not unusual for a production to go to a church to house extras, and you need a big space to serve lunch. How will they be able to do that?”

All three women got into movie making without planning to. 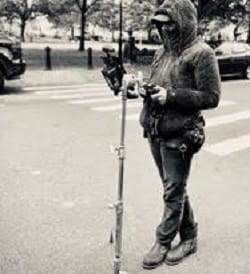 “People stumble into the movie business in different ways,” said Folger. She had a degree in biology and went to work at Boston University Medical School. Photography had long been a hobby, and she began shooting photos of bands and clubs for fun.

She got to know a young film director named Brad Anderson who was making a movie called “The Darien Gap” and did some photography for him. The movie went to the Sundance Festival and, through word of mouth, Folger got hired on other movies. “It’s always going from job to job,” she said. “We all talk about what’s going on, what’s your next job, what’s coming in. We talk to each other and producers look at who was hired in the past. You get in that loop, and you move forward.”

While a movie is shooting, Folger sits next to or under the movie camera, completely quiet. She uses a silent camera that makes no clicking sound as each picture is taken and is on the set as long as it takes, often working 12 or 14 hours. She was in New Orleans from November of 2019 until February this year, on a movie called “Deep Water” with Ben Affleck, directed by Adrian Lyne, known for “Fatal Attraction.”

“We had to get out of New Orleans because it was Mardi Gras in two weeks and the hotels were booked. We were trying to finish up before there was an influx of people. I went to four parades not knowing I should have stayed away from people.” It turned out later that Mardi Gras may have led to many cases of Covid-19 in Louisiana.

Grew up in Arlington

Walsh grew up in Arlington -- where her father, Bob, a selectman from 1974 to 1990. She studied theater at UMass/Amherst, aiming to be a set designer. A costume designer from New York was on campus, and the two got to know each other. Walsh was invited to be her assistant in New York. From there, she went to Los Angeles, where she worked on such TV programs as “That Seventies Show.” She moved back to Arlington in 2003 to be near family, working on movies. including “Gone Baby Gone” and “Fever Pitch.”

She takes care of the costumes but looks after the actors as well, making sure they are kept warm while waiting outside for their scene during the cold weather and that they have what they need. “You develop a close relationship with the actors you are taking care of. It’s a little bit like being a mom.”

It’s not always quite as exciting as it sounds. She worked on “Contact” with Jodie Foster, who had to be slathered in gel so a mold could be made for a costume. “I had to clean up the gel, and as I was looking up at her, I joked, ‘Your life is so glamorous,' and she joked back, ‘Shut up, Taryn!' We had a good kidding around relationship.”

How did Janke become a camera assistant? She laughed: “I tripped and fell.” She had some internships at college doing production work, and when she graduated landed a job at a production house, which led to camera work.” Over the years, she worked on “Gone Baby Gone,” among other movies, as well as political ads and commercials. “This was supposed to be a big year for us because of political ads and now we’re having problems, as you can imagine.”

Coincidentally, in 1994, she was the camera assistant for a Nova production on PBS called “The Most Dangerous Woman in America,” about the person known as Typhoid Mary, a cook who spread the disease until she was quarantined against her will on two occasions for a total of 26 years.

For now, the long but fun days and the pride and excitement of being part of a popular movie are gone. “We are all out of work,” said Folger. “Shows were shut down, because they didn’t want to expose the crew anymore than they had to. Some people are waiting to go back to a show, others were between jobs and a few things were coming in, and we don’t know if they’re coming back. We’re waiting, just like everybody else.”