UPDATED, April 9: Arlington residents turned out amid the coronavirus to honor Mary T. Foley, an Air Force veteran who likely few of them knew.

As the procession moved down Mass. Ave. on a drizzly Wednesday morning, April 8, from DeVito Funeral Home, onlookers, many six feet apart, but some not, said goodbye to a longtime resident without living relatives. She died Saturday, April 4, at age 93.

She had been selected as the 2020 military grand marshal for Arlington’s Patriots Day parade. Because of Covid-19, the parade was canceled.

A Korean and Vietnam era veteran, she was laid to rest in Holy Cross Cemetery, Malden. Because of the Covid-19 pandemic, the military has halted the its program providing graveside honors to veterans, including "Taps" and the ceremonial flag folding. Town Manager Adam Chapdelaine, encouraged by Jeff Chunglo, veteran services director, asked the public to "line Mass. Ave." maintaining social distancing to pay tribute. 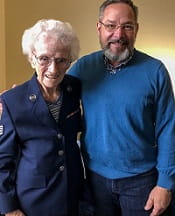 The townwide phone call from the manager April 7 drew criticism on social media.

An account of her life noted that she had conquered many challenges during her life. Her birth father left before her birth, and her mother died shortly after giving birth to her.

Mary’s sister who was 17 at the time petitioned to adopt her sister, but the minimum legal age for adoption was 18. She was adopted by her grandparents, who with her sister raised Mary.

She enlisted in the Air Force and attended administrative specialist training at Warren Air Force Base in Wyoming. During her initial three-year enlistment, Foley advanced to airman second class. She reenlisted for an additional six years, serving with the 2014th Communications Squadron as an administrative specialist. Completing this enlistment, she advanced to airman first class.

She reenlisted for another four years, advancing to staff sergeant and serving as the administrative supervisor for the 2014th Communications Squadron. She was honorably discharged for hardship/dependency reasons to care for her adoptive father. She served her country for 12 years, 11 months and 23 days.

An obituary in The Boston Globe said she was a dedicated parishioner of St. Camillus Catholic Church for 51 years. She attended Mass daily and helped by providing the altar and priests with clean vestments.

The obituary called her "a wonderful story teller and enjoyed sharing a good laugh with anyone who would listen. She especially loved telling her escapades in Europe during her years of service there. Appreciation is extended to all the devoted staff of Mt. Auburn Hospital during the recent week."

She was predeceased by her stepparents, Rita (Foley) and William Kane; and her devoted stepbrother, the Rev. William E. Kane of Arkansas and Arlington.

Because of the current precautions surrounding Covid-19, all arrangements were private and under the care of DeVito Funeral Home. In Mary's memory, donations may be made to the Rev. William E. Kane Scholarship Fund, 1175 Concord Turnpike, Arlington, MA 02476.

This summary was published Wednesday, April 8, and updated April 9, to add a link.