What it means to be a Spy Ponder 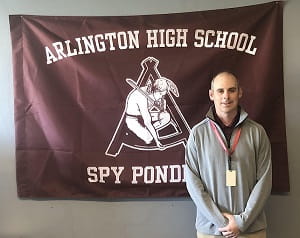 “30 Teams. One Family.” For many years, that has been Arlington High School’s motto for athletics. When you spend time with Athletics Director John Bowler, an AHS graduate, athlete and coach, you can see how true it is.

In an interview with Bowler, a YourArlington reporter saw how excited he is to take on this task. The walls of his office are covered in Arlington banners, jerseys and posters for every sport. His shelves are full, with state and sectional trophies, leaving room for little else. As for Bowler, he is always wearing the Spy Ponder maroon and gray, whether it’s as a spectator at game, or just walking the halls of the high school.

Bowler brings needed stability to athletics, as the two previous directors left under a cloud: Melissa Dlugolecki, in 2018;  and Edward "Ted" Dever, in 2012.

Underpinning that hope for stability are Bowler's local history, his sports background, his community connections and, looking ahead, a rebuilt high school, which includes revamps athletics facilities.

Once an Arlington student-athlete, he played on the AHS basketball team and ran cross-country. As an athlete and coach, he knows every aspect of life as a Spy Ponder.

Reflecting on his time as an athlete, Bowler illustrated his passion for his job, and Arlington athletics as a whole: “I know when I played at Arlington High, every time I put on an Arlington jersey, it was a privilege. Seeing all those kids compete with an Arlington High jersey on, to me, there's nothing better.”

Reminiscing about his fondest memory representing Arlington as an athlete, Bowler cited his 36-point performance in the second round of the state basketball tournament his senior year.

I like going to the games. During the day,

it is a lot of office work and sitting at the

After graduating from AHS in 1993, Bowler continued athletics at Worcester State University, playing Division III college basketball. After four years there, Bowler became an assistant coach for Salem State. After four years there, he returned to Arlington, taking the job as AHS boys' varsity basketball coach. In charge from 2008 to 2019, he guided the Ponders to three Middlesex League championships, including back-to-back titles in 2017 and 2018, in addition to nine MIAA state tournament berths.

Despite much success as varsity basketball coach, Bowler made the tough decision to leave his position and fill Arlington’s need for an athletics director. Drawn by the opportunity to work with more Arlington athletes, coaches and sports, Bowler said he was excited “to have more of an impact at Arlington High School, not just on the basketball program.”

Now, as director of athletics since last July, he wants to impart what it means to be a Spy Ponder to a wider team. He exhibits this with his consistent attendance at games for every sport and level, which he calls his “favorite part” of his new position. “I like going to the games.” Bowler explained in the interview. “ During the day, it is a lot of office work and sitting at the computer … but I just like seeing student athletes compete.”

Aside from coaching, Bowler spent most of his time overseeing various programs at the Arlington Boys & Girls Club. Working there from 1998 until last summer, where he most recently served as the operations manager, Bowler did “A little bit of everything,'' acting additionally to direct athletics, aquatics and programs. He hopes to use the connections he built over his 21-year tenure at the club as a platform to involve Arlington athletics within the community.

“I know a lot of the kids and families,” he said. “I have a great relationship, and I think we’ll be able to do a lot of great things with them.”

An example of this relationship is having the basketball program help the Boys & Girls Club around the holidays each year. All in the program, from freshman to varsity, come out early in the morning, unloading of hundreds of Christmas trees.

Overseeing an athletics program for a school with 1,400 students and 30 teams is no easy task, but after taking over, Bowler says that the transition has been smooth thus far. With various game schedules, practice times and field permits to organize, it's a lot to get used to.

Bowler accredits his smooth start to the help of the Arlington staff and other athletics directors. “The [Arlington] administration teams, the athletic staff, custodial and maintenance staff all make it pretty easy,” he said. “All the athletic directors in the league are great. If I have a question, I can call them and they’ll pick up and answer right away.”

After settling into his new position, the 44-year-old hopes to really bring Arlington athletics and the community together. “I definitely want more school support. More students coming to games” and “a lot of support from the community.” One way he hopes to achieve this is by increasing the visibility of Arlington athletes. Whether it’s through volunteer work or running clinics for local youth sports, a few examples he provided, Bowler hopes that “By having AHS athletes run clinics in youth sports, those kids are going to want to be high school athletes, and dream about playing for Arlington High School one day.”

As a former coach, Bowler has a unique perspective of his new position, particularly when it comes to keep athletes at the high school. “Over the past three years, we lost six kids to prep schools [from the basketball program]. So ... I’m asking, ‘What can we do to keep those kids here?’” He stresses that he wants “to make it a place where people want to stay,” a place that will “be able to stay and still achieve the same goals of playing in college.”

The new high school may help. With groundbreaking due this summer, the four-year project is a challenge AHS AD has had to deal with before. Bowler expressed his excitement at the prospect of new athletics facilities and fields.

“We will have all-new turf fields, and having a baseball field on campus will be great for the baseball program,” he said. “The baseball field will also act as a competitive soccer, lacrosse and field hockey field, so it will help with a lot of the issues of JV sports playing at different fields ... as well as having better practice times, as the turf is currently used by football, boys' soccer, girls' soccer, and field hockey in the fall.”

While construction is underway, Bowler said he is unsure about the effect on athletics: “I think we will have to Red Gym most of the time, but you never know if we may lose fields, the Blue Gym or the Pit.” He said AHS “will be working with all the other gyms in the town to try to figure out what space we will need as the construction begins.”

Involved with Arlington athletics for 30 years, with insight into all aspects of Arlington High School life, Bowler is the ideal fit for Arlington’s AD job. Seasoned and local, Bowler has firsthand experience and the resolute determination to integrate the athletics program into both the local community fabric, as well as the new school population that will be fostered by the redevelopment of the high school campus and sporting facilities.