Along the bikeway, a room of our own

WBUR takes a look; have a listen >> 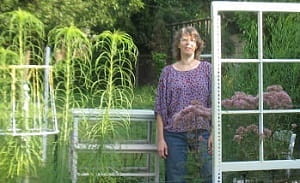 Perhaps you baby your backyard as if it were a putting green, making sure your grass is thick but clipped like a crew cut.

Freedom Baird doesn't. For the North Cambridge artist, grass grows inside her "home" — that 10- by-10-foot, temporary installation beside the Minuteman Bikeway near Spy Pond.

To weed and trim the grass, she goes inside, gets down on the cramped ground and uses scissors. "Room to Grow," an Arlington Public Art project, aims to address the "culture of disposibility," Baird said in an interview at the site on a brilliant recent morning as bikeway activity buzzed by and bees buzzed in.

Asked about the installation's aims, she spoke slowly, carefully: "I'm always trying ... to call attention to the connection between humans and nature." In schools, science museums and movies they are presented to us as "separate — but they're really not. I'm alsoalways thinking about materials .... all used here have their origins in nature."

The artist gave herself a week to find the objects for her project in her neighborhood, as a way of paying attention to how much furniture was discarded the last weekend of May. "I found so much furniture put out for trash in my North Cambridge neighborhood that I could've furnished several rooms."

All were left on the curb, except for the lamp (free online), the chair (paid $5) and the picture frame ($1 at a yard sale).

The queen-sized, oak bed frame needed to be cut down to twin size to fit in the 10-by-10 space. "An oak tree grew," she said, and from its wood a bed was fashioned. Now, under her artistic real-world vision, pink turtleheads (chelone lyonii) poke through the empty frame. "Hot pink," she said.

One who sleeps here doth perchance to dream pink blooms.

Why do this? "I wish we'd be more aware of where objects come from," she said.

Not just the bed. She made all of her found objects "skeletal," and plants rear their bright heads through them all. Consider the accompanying list.

Meikle describes a moment when plastics manufacturers realized that the postwar boom was eventually going to wane. At a pivotal meeting, J. W. McCoy, a vice president of DuPont told his colleagues they must “see to it that Americans are never satisfied.”  So they devised ways to teach consumers to throw away perfectly good cups, spoons and other consumer goods.

In response to this, Baird said she began thinking of simple rooms and shelters, asking, "What is enough?" The pinched quadrant, encircled by garden-fence wire, reminds one of the size space of the "hut" that Thoreau lived in from 1845 to '47 near Walden Pond.

One of Baird's visual references for the space is a painting called "Van Gogh's Bedroom." An image of the painting at the Musee D'Orsay in Paris, where she saw it in the late 1908s, is here >>

It is likely that neither Thoreau nor Van Gogh had the purple splash of joe Pye Weed gracing a window, as Baird does. As she spoke, a honey bee alighted on a small bloom. "Oh, it's pollinating," she erupted.

Her advice about native plants came from an expert, Judy Otto of Lexington, her cousin. Otto is a longtime member and handbook author of the Victory Gardens, part of the 70-acre Rock Meadow Conservation Area off Mill Street in Belmont.

"Room to Grow," between Spy Pond Park and Linwood, backs against some Wyman Street neighbors and has helped Baird meet them. One is Suzanne, a beekeeper; another is Bob, who invited her to fill watering cans from his backyard spigot.

Her art draws more than neighbors. Freedom has been meeting the public at the site Sunday most afternoons since July 7 from 3 to 6.

Each visitor views the installation from his or her perspective. One cyclist rode by, asking, "Is it for rent?"

Another shouted: "I love what you're doing."

Some appreciate the colors of the furniture and plants; some like to see art in a public space.

One commenter called the art distracting to someone who just wants to walk the bikeway and enjoy nature.

Baird saw this as an opportunity for an exchange. She replied that public art brings it to those who do not have the chance or wherewithal to go to museums or galleries, for whatever reason.

The questioner told her she thought the response made sense.

"This is part of the work," Baird said, "having the conversation."

Another visitor said the room reminded her of the old single-room-occupancy units where poor people and vagrants lived in the first half of the 20th century. For Baird, this is exactly the point of the installation, to raise questions in the visitor’s mind about how much space is enough. How many material possessions are enough? How much carving resources out of nature to meet human needs is enough?

Baird aims to avoid what she has built as "looking too pretty." She also does not want the viewer to be able to solve what the installation is too quickly — a strategy to keep the public engaged.

She balances beauty with something that makes it look "unsettling." Whether it does is up to the viewer. Thus, the pale, weathered paint adds something "ghostly ... like bones."

Inevitably, a journalist — who forgets that poet Walt Whitman began as a newspaper editor — has to ask, "Why is this art?"

Her whimsy chides the question: "It's an excuse to be outside." More seriously, she says, it's "propaganda," to convey a message and spur conversations.

Discussions about what? "Sustainability," she said, and how we acquire, use and value the objects and materials we have.

“If we can train ourselves to consider the journey that any object takes as it goes from its sources in nature — living plants, seams of metal in a mine, drops of crude oil deep underground — into our hands, maybe that will help us value each object more, and throw away less.”

On Sept. 15, from, 4 to 6 p.m., Baird will join the other artists whose work is on display for the PATHWAYS exhibition in a community celebration at the site with food and music. All are welcome. Details about the event will be posted on the Arlington Public Art website.

The artist, raised in New York City and educated at MIT and MassArt, has two 15-year-olds. Against a tree leaned her bike. She got on it and rode back to other rooms she calls home.