Lie back on soft grass in a place with little city-lights pollution -- near New Hampshire's White Mountains? -- and drink in the summer's night sky. 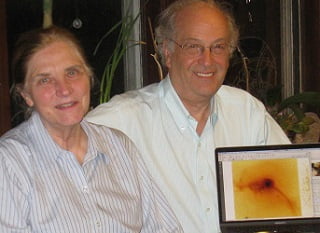 Christine Jones and William Forman at home. On screen is Chandra's X-ray image of the hot gas surrounding galaxy M87, at the center of the Virgo cluster.

What do you see? The Big Dipper ladles pinpoints of light. A trio of stars studding Orion's belt beckons.

Squinting, you see the Milky Way, the hazy band of fiery spheres that embrace us.

Chandra sees far more -- back toward the beginning of our Universe.

The X-ray telescope has advantages over ordinary vision. The NASA project hosted at the Harvard-Smithsonian Center for Astrophysics circles the Earth in a highly elliptical orbit with a maximum distance of about 85,000 miles in space, giving scientists a clearer view of exploded stars, clusters of galaxies and black holes.

Those who study what Chandra sees are town residents William Forman and Christine Jones, part of a team of 160 that includes a number who live in town.

This remarkable eye into the distant past, one that transforms our present, observes its 20th anniversary this month.

"I have been very fortunate to work with very smart people," Christine said in an interview at their home about the past 45-year association with the Center for Astrophysics. She stepped down this year as president of the American Astronomical Society.

At a dining-room table arrayed with images from Chandra, her husband gave credit to a mentor for them both, Riccardo Giacconi, who gave them "incredible responsibility." The X-ray astronomy pioneer who won the Nobel Prize in 2002 advanced both in the 1970s. Since 2010, William has been director of the High Energy Division at the Center for Astrophysics, where the Chandra X-ray Center is situated.

The informal two-hour chat ranged over the heavens -- and their lives.

In April, when Chandra made news with the discovery of a black hole, Kathleen Lestition posted on the Arlington email list:

"There is indeed a connection between the black hole observation and Arlington. By my count, there are at least 12 people working on the Chandra X-ray Observatory, which is operated from the Center for Astrophysics|Harvard-Smithsonian, who live in Arlington ....

"The Chandra mission simultaneously observed M87, the galaxy in which the black hole observed by the EHT [Event Horizon Telescope] is located, to provide a wide-field view that locates the position of the black hole within its home galaxy."

The Formans provided these names of town residents:

Town residents who formerly worked on Chandra are Mike and Jiahong Juda. Mike was lead flight director and missions operations manager from 2004 until his death in 2016. Jiahong worked on Chandra from 1993 to 1997 as astrophysicist, gratings calibration.

They offer gentle presences, quite apart from the fire and wonder that their work peering into deep space reveals.

Christine's smile is wise and spare, her comments tinged with her Ohio roots. Bill's boyish smile is set off with curling locks. He retains a bit of his native New Rochelle, N.Y.

She lived near Dayton, not far from Wright-Patterson Air Force Base, where she was involved in a program, which triggered her interest in astronomy. While in high school, she took math at Ohio State under a National Science Foundation program begun by Arnold Ross, a legend in math education. In a number-theory class of about 50, as few as seven were girls.

She graduated from Harvard-Radcliffe in 1971. Asked what drew her to the stars, Christine, 70, called it "exciting" to "learn about the newest" in science.

Bill, 71, said he always loved math the best and "drifted into half astronomy/half physics." He called it a "nonconscious drift." The 1969 Haverford College graduate went on to Harvard.

Looking back 3.4 billion light-years into the Universe, Chandra observes such visible phenomena as a bullet cluster, two colliding clusters of galaxies, as well providing parameters for what is unseen, "dark matter," which accounts for 85 percent of  matter in clusters.

What Chandra shows us are "great images," he says simply.

Beyond the mission of scientific discovery for its own sake, what has been the impact of these glimpses into deep space?

Bill opened a book to the Einstein field equations. The mathematical expression underlies the General Theory of Relativity -- which has a number of applications, including GPS way-finding.

"One hundreds year later [after Einstein published his equations], we can't live without them," he said.