Resident recalls part he played in putting astronauts on Moon 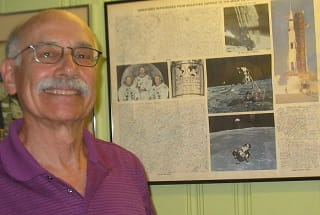 All these years later, it plays like a childhood dream -- landing your first job out of college as an engineer who will help put men on the Moon.

But that's what happened to Ron Rosenbaum of Arlington.

In an interview, the retiree, who these days is grounded on Earth in his garden near Spy Pond, looked back to the 1960s, surveying the highs and lows of his work at Grumman Aerospace on what was at first called the Lunar Excursion Module.

"I was always fascinated by airplanes," he said in his basement office marked by a large photo showing the three Apollo 11 astronauts and the spacecraft that carried them to the lunar surface on July 19, 1969. Included are the signatures of many from the large team of Grumman engineers involved.

INSIDE ARLINGTON: Among our many-faceted residents

Also on the wall is a banner from Penn State. In short order in September 1965, he received a degree in aerospace engineering, married and got a job at Grumman in Bethpage, L.I.

The Moon challenge that President Kennedy announced in 1961 at the height of the Cold War swept up a number of military-industrial corporations in the mission that resulted in the stunning U.S. achievement eight years later. Rosenbaum's role was no doubt like that of thousands of engineers, many from Massachusetts, as The Boston Globe reports.

Yet the personal story of a town resident is well worth telling, told via the specifics of a builder, which give shape to what poets only imagine.

"What was really exciting," he said, "was the problem to be solved." The attitude from Grumman management at the time was: "You can do anything to solve the problem."

That simple expression of freedom let minds loose -- but within project boundaries. Learning what those confines were involved a rookie engineer's basic training.

With a quick smile widening below his mustache, Rosenbaum recalled his initial assignment, to work on the design of the cabin area of the lunar module's ascent stage. He was paired with an experienced designer, whose name he remembers.

How design occurred then

In 1965, computer-aided design was a distant dream. With straight-edges and triangles, he applied grease pencil to Mylar, and made his calculations with a slide rule.

Beginning to draw a design the way he was taught in college, with fine lines, his group leader came by, snatched his pencil and broke it. That's "not the way we do it," he was told.

The right way? "You have to make the lines bold enough so that the drawing can be reproduced clearly." Drawings of sheet-metal parts had to be capable of being photographically transferred to metal to make routing templates and forming tools, he learned.

The cabin of the lunar module was cramped -- 7.5 feet high, 14 feet wide -- and about 200 engineers worked on every aspect. Rosenbaum worked on the structure around the front windows and prepared installation drawings and procedures for the initial measuring unit and rendezvous radar.

An analyst checked his stress calculations, which had its own stress. Then the group project engineer  would silently scrutinize the design, "pointing to the very thing I didn't want to talk about: 'Why did you do that?'"

A tense question, but a good one in the overall process. 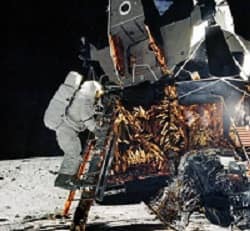 The Brooklyn native walked home that day; others didn't, he said: They used lights from cars to illuminate a cavernous work area.

A key focus on developing the lunar module was making sure it was as light as possible. It had a maximum control weight, and achieving it resulted in many redesigns to get weight out.

Materials were always an issue, and that was true of reflective coating used for micrometeorite protection on the lunar module's exterior.

One came from a surprising source, not far away, in the theatrical world of Manhattan -- a highly reflective aluminum material used in set designs. Grumman bought up a bunch "before anyone figured out why."

Then there is the apocryphal story of the ladder.

Working with a full-size mock-up of the lunar module, engineers were trying to figure out the best way for an astronaut to exit the craft. Complications included not knowing where landing would occur, so to account for the vagaries of the Moon's surface, the length of the module's legs could vary. Those involved worked on many solutions to figure out how to get the astronauts from the door to the ground.

On the day an astronaut showed up, with no concluding plan in place. He asked: "Where the ladder?"

In 1966-69, Rosenbaum moved away from the module and worked on other defense projects at Grumman -- the C-2A twin-engine turboprop, the EA-6B Prowler, the F-14 Tomcat.

In January 1967, the deaths of three astronauts in the Apollo 1 fire shook NASA, stoking fears that it would kill the program. "Engineers worked to show our space program at its best," he said with pride, adding the lurking fear: "We worked hard to minimize risk, but going to the Moon was a high-risk endeavor, and we always recognized that with a major failure someone could die."

Some of that pride emanates as he responded to the photo quality in the three-part PBS series "Chasing the Moon." The grainy shots were those beamed back to Earth and had to be low bandwidth. The best shots were stills taken with their Hasselblad cameras and developed later.

Of the July 21, 1969, walk on the Moon, the clear picture Ron remembers is the one he saw on his TV at home after he had been laid off.

That illustrates the ups-and-downs of the industry in which he worked. That should not be the last word here. Consider this:

The structure he designed and the equipment installation drawings he made were used on all of the lunar modules that were built, starting from test article 3 (LTA 3) through the lunar module that flew on Apollo 17, the last mission.

"As I look back at my 45-year career in various aerospace and defense companies I worked for," he said, "the LEM program stands out as not only my earliest design program, but the most satisfying and exciting."