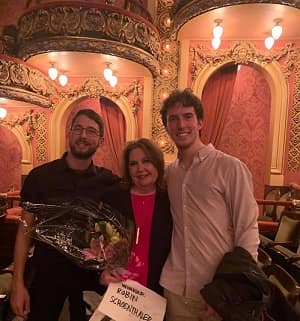 Your voice tells your story, if you let it, and so it is with Dr. Robin Schoenthaler.

Speaking in a breathy rush -- responsive, like water bubbling in spring, the sound of courage overcoming fear -- the Arlington doctor won the Moth storySLAM before an estimated 1,100 people, including a crowd from town, at the Cutler Majestic Theatre.

Her five-minute, true tale of loss leavened with humor was judged best among 10 speakers on March 26.

"I never thought I'd win," she said in an March 31 telephone interview. Why? Because of the competition and the darkness of her story.

She called participating in the story-telling challenge in front of many she knew "life-enhancing ... so exciting." She said she was "completely high for days."

The tide of response and applause has stayed with her, she said, because she "got to say Ryan's name three times in front of everyone." Ryan was her son who died in June 1994, nine days after his birth.

Her winning story, told in the ornate, 1903 Beaux-Arts Boston theater, focuses on a cycling trip in Thailand six months after her loss.

Many stories that night were lighter in theme, a number touched with humor. So was hers.

"Using the bike tour as a backdrop to process major grief," she said the story's shape ricocheted between dying and surviving.

How did she blunt the serious edges? With the wit implicit in the reality that she was not a cyclist.

She booked the trip as a salve to her spirit, but, she realized, laughing, "they expected me to ride a bike." Indeed, they did, and so she pedaled on.

Another theme added irony: For her, the trip "obliterated Christmas."

Her flight out of Logan left for Thailand on Dec. 24. Crossing the International Dateline, she arrived Dec. 26. She "missed" Dec. 25.

For those with grief, fresh or aging, the first sets of holidays can be "brutal," she said, so skipping over Christmas was a huge relief.

The Moth has been with us since 1997, since novelist George Dawes Green sought to recreate sultry summer evenings in his native Georgia. There, moths were attracted to the light on the porch, where he and friends would gather to tell true tales. Begun in New York, the stories have branched out nationwide.

No doubt those tales took longer than five minutes, the limit for Moth competition. And as was likely true about the original living-room gatherings, the teller has no notes.

An author of essays for about a decade -- read one here about her son, Ryan -- Schoenthaler turned to story-telling the last few years, beginning casually in Moth events. Her practice as a physician provides grist for many narrative directions.

Using your voice to tell a story is "a totally different craft" than essay writing, she said, but each requires significant preparation.

Your tale is not extemporaneous; it must be true, personal, have movement, crafted in advance and roughly committed to memory. Schoenthaler's matured in 11 drafts.

At the Cutler Majestic, all competitors had won Moth StorySLAMS -- walk-in live, story-telling events designed around a theme. Schoenthaler had participated in a number of these slams, sometimes on stage with semiprofessional story tellers, sometimes with fun people who like to spin out a yarn.

She won a StorySLam at ONCE, a Somerville nightclub, last May, when she told a story on the theme “Falls.” This qualified her for the championship with the nine other StorySLAM winners.

She won the Moth grand slam March 26, against those she considers "semipros, often funny, gifted."

The judges are the members of the audience; she called the process "arbitrary."

"A huge part of the night was the fact that Arlington poured out in support, as did my co-workers from Emerson Hospital and MGH," she said. "The audience support was just fantastic. But the best part of it was that both my sons were there.”

In the audience were Cooper, 19, studying finance at Northeastern, and Kenzie, 23, majoring in biology at Leslie.

These "fans" were shouting, she said.

A 1987 UCLA Medical School graduate, in her native California, she has been a physician 30-plus years. Among other duties, she cares for cancer patients at Emerson. Look into an earlier essay, and you will find out lessons she has learned.

This news feature was published Tuesday, April 9, 2019. NOTE:  The publisher thanks a town resident who has long been a source for this site for the tip about this story.