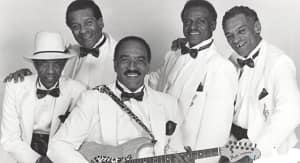 Teddy Scott (second from left) posing with the G-Clefs in an undated photo via Legendary Locals.

Theodore "Teddy" Scott brought his baritone to the Res those summers in the 1990s when he'd wheel in a boom box, a telescope and a day's worth of food.

Under a broad-brimmed hat, he'd sit all day in the shade on a faded green bench near the old concession stand, his smile as bright as July.

Our family often sat near him and talked, and sometimes sang a few tunes, including doo-wop. Teddy was known for that '50s style.

The singer with G-Clefs, who had national hits with “Ka-Ding Dong” and “I Understand,” died at his home in Arlington on Saturday Oct. 27, at the age of 82. He was diagnosed with prostate cancer in March and had been receiving hospice care.

He is remembered for the music he made. An obituary at the Pop, Rock & DooWop site by Todd Baptistaby Todd Baptista tells the most complete story in words and photos. Here are excerpts:

One of seven children, Bryce Theodore Scott was born to Karl Anthony and Christine Rose Scott on Feb. 29, 1936, in Harwich, Mass., and relocated with his family to Roxbury in 1944. As a teenager, Scott began playing drums and had the opportunity to sit in with Dizzy Gillespie before the G-Clefs were formed. Teddy, his younger brothers, and neighborhood friend Ray Gipson began singing in St. Richard’s Catholic Church Choir and soon brought their love of music home to their neighborhood.

The three oldest Scott brothers -- Teddy, Tim “Payme” and Christian -- Ray Gipson and Robert “Joe” Jordan, formed the original quintet as the Bob-O-Links in 1953. Gipson suggested a name change to the Five Clefs, which was modified to G-Clefs after Mrs. Scott heard the group rehearsing the Crows’ hit “Gee.”

Their debut, the rocking Gipson-led “Ka-Ding Dong,” reached No. 24 on the pop chart in the summer of 1956. That fall, Teddy Scott sang lead on the frantic follow-up, “‘Cause You’re Mine,” which featured two screwdrivers banging on a brake drum for percussion.

Reorganized in 1961 with the youngest of the Scott Brothers, Arnold (now Ilanga) replacing Jordan, the G-Clefs scored an international hit with their unique blend of the traditional “Auld Lang Syne” melody with the Four Tunes' hit “I Understand (Just How You Feel)” on Terrace label (No. 9 pop). The follow-up, “A Girl Has To Know,” charted in 1962 (#81 pop). Teddy delivered the group’s trademark recitations on both of the Terrace hits. The group’s final studio recordings, issued in 1999 on the “Then and Now” CD, included a superb original, “The Note,” again featuring Teddy delivering a recitation.

In later years, the G-Clefs performed primarily in southern New England. In 1993, they were honored by the Massachusetts House of Representatives in recognition of “outstanding contribution to the entertainment community and the city of Boston ... and for serving as role models for 35 years to African-American children and young people of all ethnic origins.” The lineup remained unchanged until their retirement from live performing in 2012. Gipson died in 2015; Tim Scott in 2017.

Teddy Scott was active in his community as a Girl Scout leader and enthusiastically served as a chaperon for his daughters’ field trips and supported all of their extracurricular activities and served as the neighborhood “lunch dad.” Affectionately known as the “Pied Piper,” Teddy was loved by the youth of his town for his tireless and enthusiastic support, love and dedication to children of all ages.

He was a founding member of the Band of Angels, a community social and philanthropic organization.

Scott was included in the 2015 book by Marjorie Howard and Barbara Goodman, Legendary Locals of Arlington, from which the photograph accompanying this obituary was taken.

His grandchildren are Aysun Thomas, Perri Felder, David Tavares, Ashley Barrow and Lucas Tavares. His great-grandchildren are Liam, JoJo and Olivia. His brothers are Christian Scott and Ilanga, both of Roxbury.

In lieu of flowers, donations may be made to St. Jude Children Research Hospital, 501 St. Jude Place, Memphis, TN 38105. To send an online condolence visit www.keefefuneralhome.com.