Mimi Rabson and BREO, a different kind of youth orchestra 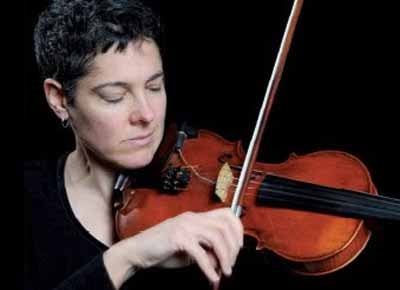 Like James Brown's "brand new bag," the Berklee Really Eclectic Orchestra (BREO) brings something innovative to the musical scene: a chance for young string players to get together and explore contemporary pop styles, such as jazz, funk, rock and fusion. Founded last fall by Arlington resident and Berklee associate professor Mimi Rabson, BREO is an ensemble for Boston-area high school students who want to learn how to improvise and perform in a variety of musical genres.

Rabson, a classically trained violinist, decided she wanted to play pop music at a fairly young age. "When I was in high school," Rabson recalled, "I found there was this big disconnect between the music I was doing for my lessons, which I loved, and the music I listened to at home for fun. By the time I got to college, I knew there was no clear path to where I wanted to go, and I realized I had to create it."

Ann Rabson turns her on to jazz

Rabson's older sister, Ann, who had launched a successful career as a blues musician, bought Rabson her first jazz album, as well as recordings featuring violinists Papa John Creach and Don "Sugarcane" Harris, who were both playing nonclassical music. "That gave me the idea that it's possible to play different kinds of music on the violin," Rabson said.

To join BREO, send an e-mail to PerformanceDivision[@]berklee.edu with the subject line "RSVP for BREO Jam" or call 671-747-6276. For more information, visit www.berklee.edu/BREO or use the above e-mail address. BREO is free and runs from Jan. 20 to May 12.

While at New England Conservatory (NEC), a friend of Rabson's who was a jazz saxophone player introduced her to the Real Book, the standard compendium of jazz tunes, and explained how to use it. "That opened up a bunch of doors," she noted. Also while at NEC Rabson became one of the founding members of the Klezmer Conservatory Band.  "What I loved about that was that I could play with a drummer. Wow! When do you ever put those two together? It was great to be able to do it," Rabson said.

"I have nothing against classical training; I'm grateful for it, and all string players should have it," Rabson asserted, "but it's nice to have some alternatives and be trained in those alternatives. Right now, it's difficult for string players to get that kind of training, especially at the high-school level. BREO helps provide it."

In BREO there's no sheet music; everything is learned by ear.  "We're lucky that there's a way to preserve music in written form," she noted, "but if composers of the past had been able to make recordings on their phones, I wonder whether we would have written music."

In nonclassical styles, she adds, "there's a lot of stuff you can't write down, like how to swing eighth notes. It has to do with accent, and you can't write that accurately."

Further, the way written music is played depends on the person reading it. "Classical musicians are trained to read notes and make a specific sound," Rabson said, "but someone who's had jazz training will look at the same exact notes and rhythms, and make a different sound. Notes on the page are really a small part of what's in the music."

Although she concedes that some students, and their teachers, may be concerned that playing pop or jazz may have a negative effect on their classical technique, Rabson said there's no cause for alarm. "Even in the world of classical music," she said, "you use different techniques for playing Renaissance, baroque, romantic or modern pieces. People play in a variety of styles every day. They're not mutually exclusive; they're complementary. One enriches the other." 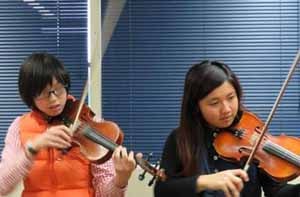 Rabson mentioned that a number of classically trained violinists, in addition to Creach and Harris, are known for playing music in pop genres, such as Jean-Luc Ponty and Jerry Goodman. "They play in lots of styles," Rabson said, "and that seems like fun to me."

BREO members learn not only new techniques, but also how to improvise. As Rabson noted, "I'm interested in creating new idioms. I can't teach my students what they're going to invent. I can only lay the groundwork so that they can come up with new genres in the future." Last fall ,the BREO repertoire included "Back in Black" by AC/DC, "Pass the Peas" by James Brown, "Isn't She Lovely" by Stevie Wonder and a blues tune written by Rabson, but she says that the point of playing such pieces is "to give students some tools so that they can become the next Beethoven, Brahms or Ponty, or found the next Mahavishnu Orchestra or Led Zeppelin, or whatever."

Having run a similar ensemble for Berklee College students for the last 15 years and one for the Berklee Five-Week Summer Performance Program for half a decade, Rabson sees BREO as a natural outgrowth of that experience.

"Berklee is the only place to do this," Rabson said, thanking the administrators who have supported her in developing the idea. They include Rob Rose, vice president of special programs; Matt Marvuglio, dean of the Professional Performance Division; David Wallace, chairman of the String Department; Krystal Banfield, dean of Berklee City Music; and Robert Doezema and John Pierce, associate directors of the Five-Week Performance Program.

What's the future of BREO? "I'd like to see this model spring up in other music programs and have other teachers doing it, not just me," Rabson said. Eventually, she would like to have several BREO ensembles at different levels. BREO jams are free, and they're scheduled on Friday nights so they don't conflict with Boston Youth Symphony Orchestras or NEC Prep offerings. (See sidebar for information about how to join.)

Crystal Zhu and Eveline Ho, both Arlington High School freshmen, are enthusiastic BREO members. "I love this group," said Ho, "because it teaches me new techniques. I was nervous when I first tried to improvise, but now I can do it fluently in three keys." Zhu concurred: "BREO lets us think creatively, and that's really fun. You get to meet a lot of new people from all around Boston, and you can just chill out and jam with them."

Arlington High School instrumental music director Sabato ("Tino") D'Agostino, also thinks highly of what BREO has to offer. "The contrast among genres is helpful for students," he said. "By widening their repertoire of music and techniques, they become better musicians. They're adding something to their vocabulary; it's like learning a new language."

"All along, I've been looking for ways to connect different genres of music with my instrument," Rabson observed, "and BREO is one way to do it. Many professional musicians have told me they wish they’d had a similar ensemble when they were in high school. It's all about the joy of making music. There's no reason to be a musician if you don't love it."

Respond by Wednesday to help ACA plan its future

AIFF kicks off festival Oct. 4 with author at BPL

Construction of new AHS: Through week of Aug. 22