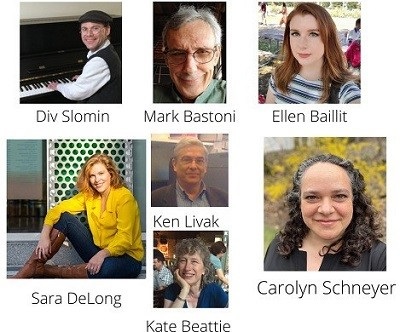 Seven of the Arlington residents involved in 'Iolanthe.'

The show opened Sept. 16 and is scheduled to run through Oct. 2, with performances Fridays and Saturdays  at 8 p.m. and on Sundays at 3 p.m.

Tickets are $25 per seat and may be purchased online or by calling 781-646-5922 and leaving a message. Tickets will be made available at the door if the performance is not sold out.

Organizers emphasize that masks are required to be worn throughout each performance; these are available for free in the lobby. Also, audience members must present proof of vaccination/identity before admittance to the theater.

All ages are welcome, though organizers note that the show runs well over two hours, with one brief intermission.

AFD Theatre is at 22 Academy St., behind Town Hall and across from the Arlington Community Center. It is reachable by public transportation  -- the 77 bus -- and is wheelchair-accessible via a lift at the street level on Maple Street.

One of the nation's first community theaters

One of the nation’s oldest community theaters is about to turn 100 years old. When Arlington Friends of the Drama (AFD) was founded in 1923, its first president was Mrs. Cyrus Dallin, wife of Arlington’s famous sculptor.

She loved the arts and had herself written and produced Arlington’s largest historical pageant. The company first performed one-act plays, using the stage at Town Hall. In 1934, AFD purchased its present home at the corner of Maple and Academy streets, in the heart of what is now the Arlington Historical District.

More information will be forthcoming about the centennial celebration in the months ahead. However, plans currently include turning the lobby into a historical display of the theater’s history, open an hour before each performance.

Because Arlington Friends of the Drama usually performs four shows per year, it was decided that for the 2022-2023 season, they would choose one of the most successful shows from each quarter century.

Gilbert and Sullivan: an AFD tradition

Gilbert and Sullivan operettas were extremely popular in the early days of the theater’s founding. "The Mikado," "Pirates of Penzance," "The Gondoliers" and "The Yeomen of the Guard" were just a few productions staged by the AFD. But one of most beloved comedic operas of all was "Iolanthe," which was performed three times prior to this year.

Thought by many to be one of the most beautifully composed of the Gilbert and Sullivan repertoire, "Iolanthe" is full of mischief, misunderstandings and fairies. With witty and sometimes silly lyrics, it portrays peers from the House of Lords who are all in love with the same beautiful young woman, Phyllis -- but she herself is in love with an Arcadian shepherd, who happens to be half fairy. Havoc ensues when Phyllis sees her intended embracing his immortal fairy mother -- who looks so young that Phyllis cannot believe that she is his mother.

Directed by J. Deschene, and Arlington resident Div Slomin, who directs the music, the production was deep into rehearsals when a reporter visited. Costume racks lined the lobby, and one saw set painters at work, or someone fashioning a waterfall or a boulder for the set. Cast members spent their evenings practicing the choreography by Rebecca Graber.

Set design is by Arlington resident Mark Bastoni, who designed AFD’s last play, the comedy "Boeing, Boeing." Other residents in the cast include Ken Livak, whose whole family is involved in AFD: His wife runs the box office, and his daughter was stage manager for "Boeing, Boeing." This is his first time performing on the AFD stage, and in fact, his first time on stage anywhere since his junior high school days. He plays one of the peers.

Another Arlingtonian plays Queen of the Fairies. This is Carolyn Schneyer, who is well known as a former music teacher with Music Together and who now is associated with ArlingtonEATS. A third cast member from the town is Sara DeLong. She plays Phyllis, and she has a long resume of Gilbert and Sullivan credits in other area productions. Kate Beattie, who plays one of the fairies, is also no stranger to Gilbert and Sullivan, nor to the AFD stage.

On the creative team side, Slomin, the music director, is an award-winning composer and musician – and bringing his talents to the AFD stage for the first time. Ellen Baillie is here for the second time, having caught the theater bug while working backstage on "Boeing, Boeing." For this production she is both props coordinator and assistant stage manager.

This news feature published Aug. 27, 2022, was written by Ginger Webb, publicity director for Arlington Friends of the Drama. It was updated Sept. 24, 2022, to note that all ages are welcome to attend.