BEHIND THE SCENES: Fresh, seasoned talent as AFD tragicomedy continues 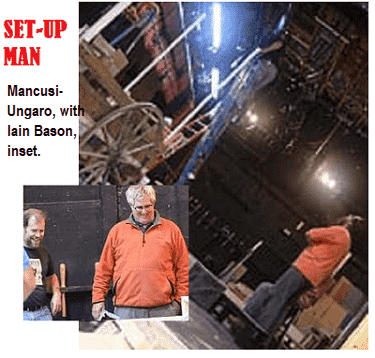 It’s Saturday morning, and the theater is alive with banging and knocking and the occasional loud crash. It smells like sawdust and doughnuts and coffee and cigarettes. It’s three weeks to opening night -- and the air is humming with anticipation of a great show in the making.

The set building crew is already here, pounding, sawing and climbing impossibly tall ladders – all in the effort to bring to life the vision of the director and set designer for the upcoming production of Tom Stoppard’s 52-year-old classic Rosencrantz and Guildenstern are Dead.

They do it four times a year -- reconfiguring the small stage in this converted church building on Academy, near Arlington Center. Last season, the stage became adjoining motel rooms (Unnecessary Farce), an office building in the 1970s (9 to 5), a glittering mansion in Connecticut (Game’s Afoot) and an Italian piazza and cathedral (Light in the Piazza). Today, they’re working on the winch that lifted the villain in “9 to 5,” and putting it to different use altogether – hence, the ladder.

“Arlington is so lucky to have this core team of dedicated, knowledgable tech people, who love finding and solving problems,” says Greg Mancusi-Ungaro, AFD technical director, and the set and lighting designer for Rosencrantz. “Everybody knows what to do to make it happen. Working here is a lot of fun.”

This team of volunteers is what makes Arlington special in local theater companies, he says. “There may be other local theaters that have newer toys and bigger stages. But no other theater I’ve work at has eight seasoned people who can get stuff to happen in the way they do here. Scenery, costumes, make-up, lighting, sound, you name it …. there is a great group committed to making theater at AFD. It’s a testament to the organization as a whole.”

Right now, the stage is taking on a whole new life, far from a seedy motel or an Italian tie shop. Inspired by Stoppard’s many references to the concept of the “box,” the set is full of containers: crates, boxes, trunks. “The idea is to present lots of boxes, lots of lives, lots of possibilities,” says Mancusi-Ungaro. While the play is wildly funny and playful, it also dives deep into the philosophical puzzle of existence -- perhaps we are all living in a box? As Rosencrantz notes in the play, “Not that I'd like to sleep in a box, mind you, not without any air -- you'd wake up dead, for a start and then where would you be? Apart from inside a box.” 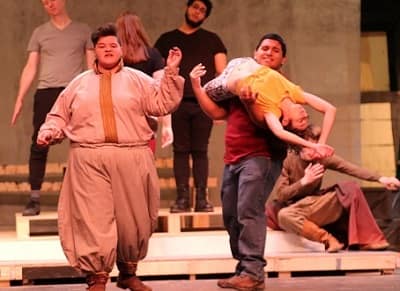 Carrying on are Sara Kerr as Lead Player and Jaymes Sanchez as Guildenstern.

A troupe of itinerant actors, ‘The Tragedians’ inhabit the plot of Rosencrantz, and this troupe of players is significantly important to the director’s vision in this production, “Ingrid’s [Ingrid Oslund, the director] notion is that the players provide the sinew that binds everyone together, and they exert a profound influence over the future and people’s fates. So, you’ll see vestiges of the players throughout the play -- they’re present even when they’re not on stage,” says Mancusi-Ungaro.“

The play doesn’t take place anywhere specific, and Mancusi-Ungaro notes that the stage directions in the script are more like suggestions for the mood of the moment. “It will be something like ‘murky,’ or ‘dawn,’ or ‘not a forest’.” He notes the challenges of moving the action through time and space, including on a ship. “We asked, ‘how do we take something and reconfigure it in a subtle way to give the audience the sense of what’s happening?’ We reconfigure the set at one point in a subtle but hopefully effective way; it’s a solution that we hope will prompt the audience to reconsider what they’ve seen.”

Mancusi-Ungaro is also designing the lighting for the play, which plays a key role in defining the action. As Rosencrantz and Guildenstern travel through Stoppard’s world, the lighting changes to reflect the new ideas and possibilities.

Arlington Friends of the Drama Theatre, 22 Academy St., presents "Rosencrantz and Guildenstern are Dead" by Tom Stoppard, The stage director is Ingrid Oslund.

$20 all performances. Opening-night champagne reception after the show.

This is not the first time that Mancusi-Ungaro has worked on a Stoppard play; in 1981 he had the “good luck” to work on the premiere of Stoppard’s play On the Razzle when he was on a fellowship in Edinburgh, Scotland. “Stoppard is remarkable …. As I got to watch him work, I was struck by his attention to detail, and total commitment to the performance.”

He goes on, “Stoppard, as a playwright, is incredibly detailed and meticulous, but what he cares about most is the audience’s experience of the play.

"He’s not afraid to change his ideas, or rewrite scenes -- through the previews of On the Razzle, he was constantly, honing and refining, while listening carefully and watching audiences. He never stopped searching for the best way to present his idea to the audience.

He says that Stoppard regards his plays as “incredibly malleable,” and makes way for each production to be unique.

Mancusi-Ungaro has high praise for the team that’s come together at AFD to mount this production. Rosencrantz and Guildenstern is a spirited theatrical adventure,” he notes. “It demands a lot of energy from the cast. But we have a great cast with a lot of talent, and they pull it off.”

Of Oslund, he says, “She’s very talented, and she has very clear ideas about the production. The production team is working hard to make Ingrid’s ideas come alive.”

He says Linda Burtt, the costume designer, has a special talent for imaging how costumes can evoke and support a character. “Linda is amazing, she has imagined glorious costuming concepts that are coming together beautifully.”

Involved in theater since the 1970s, Mancusi-Ungaro was on staff at the Williamstown Theater Festival before moving the U.K. He has been working in Massachusetts theaters since 2000, primarily as a lighting designer, but also as a set designer, producer and director.

A resident of the Marblehead, he frequently collaborates with the Mugford Street Players and Marblehead Little Theatre. He is the technical director at AFD.