Emma Boroson shows the kind of range on stage that would be shocking if it weren't so effortless. In the past year at Arlington Friends of the Drama, she's gone from spelling nerd to vamp: Last season, she portrayed the sweet, shy Olive in "Putnam County’s 25th Annual Spelling Bee," and currently she's starring as the sexy and crafty Franca Naccarelli in "The Light in the Piazza."

In both cases, she' brought a wonderful singing voice, a deep sense of musicality, and a lively intelligence to the roles.

"We are thrilled to see Emma back on the AFD stage," notes Nancy Rogier, publicity director at AFD Theatre. "The role of Franca shows a whole different side of her -- and the shoes are much more chic and pointy. Emma’s voice and her acting talents really shine in this production." 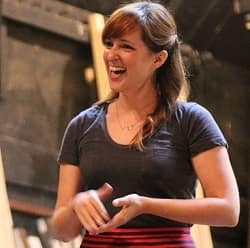 "Emma brings such nuance, complexity and honesty to the difficult role of Franca. Really, in the wrong hands, she could easily be played simply as a vixen or villainesque."

Emma jumped at the chance to appear in "Piazza," noting that it's one of her favorite musicals.

"Having been classically trained, I really appreciate the nature of the score for this play," she says. "It's so much more complex and interesting than your regular Broadway show tunes."

Ryan adds: "Working with Emma has been a fantastic experience. She's always looking for ways to challenge herself or try something new and bring the production to another level."

The range of Emma's talents extends far beyond her roles on stage. She's also an experienced music director; her credits include "Avenue Q" with The Playmakers and "The Last Five Years" with Tortoise and Finch Productions.

Emma, who grew up in Massachusetts, has settled into Arlington, where she is putting down roots at AFD. She serves on the Play Reading Committee, which chooses the slate of plays for the season.

And in other news, Emma has a professional life as a data engineer. She earned a degree in computer science and music at Brown University, as well as an MBA from Simmons College, and currently works in data management at Care.com.