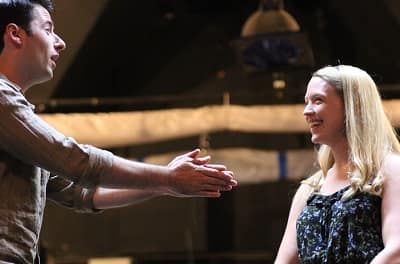 At the beginning of "Light in the Piazza," Clara Johnson sweeps onto a piazza lit with golden sunshine, singing sweetly about the wonders of Florence, Italy, and being on vacation with her mother. Everything changes when a gust of wind sends her hat flying into the hands of a handsome young Florentine, Fabrizio.

We go on a journey as she and her mother discover some difficult truths about finding love, letting go, moving on.

Suzanne Reese-Mills, in her AFD Theatre debut, brings intelligence and depth to the Southern belle who is more than she appears. As she notes, "Clara has exceeded my expectations. She's not who I thought she was."

Clara is a lovely young woman who's intellectually delayed, but has a depth of emotional sensitivity and passion that emerges throughout the play. Suzanne notes, "There's so much more to her than I thought there was when I auditioned. I made the actor's mistake of thinking this was a straightforward-damsel sweet role, but she's much more complex."

As her mother continues to insulate her from the dangers of the world, "She feels underestimated and protected when she doesn’t want to be protected. She's indignant that she's being treated with kid gloves."

The director of the production, Ryan Began, says that Suzanne has found the heart of Clara. "She brings an authenticity to the role of Clara -- where it would be very easy to make her a caricature instead of the complex character Suzanne has found and is playing."

Like Clara, Suzanne is from the South (Alabama); she came to Boston to earn a master's degree in musical theater from the Boston Conservatory of Music. She has been on stage in the region in a number of community theater companies, including "Mary Poppins" in Chelmsford and "The Yeomen of the Guard" at MIT.

She says the score of "Piazza" is more classical than she's used to, but she regards it as a "growth role," expanding her voice. She is an accomplished singer and actor, and says, "I dance when I need to."

Suzanne effuses about the experience of working with Ryan at AFD: "It's a very professional and creative team. Ryan gives us just the right amount of direction, with freedom. Freedom is actors' life blood. It's an intellectually liberating rehearsal process. It allows us to be brave in these roles."

Ryan says simply, "Suzanne is a rock star. She is always prepared and ready to play and explore. She has great natural instincts and ideas."

The end of the play is bittersweet, and invites many interpretations. Suzanne says, "I'm conflicted about the end. It's actually a little tragic. It's a bit of blind hope. I want to believe that everything will work out, but I fear they're doomed to repeat what’s been modeled for them in their families."

The play loves the light in the piazza, but also embraces "the shock of winter."