A life in the theater, transporting us to the light in Florence 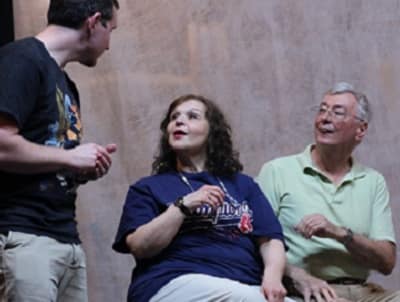 He just barely missed boarding the Titanic, was a major movie producer mogul and got to be one of the last hot lovers. In October, he'll be several different denizens of Florence, watching two young people fall madly in love in late summer light while singing in Italian.

Charlie Carr has done all this on the stage at Arlington Friends of the Drama (AFD) Theatre -- but that's just the beginning. He's also done nearly every job in a theatrical production, and most of it at AFD -- from designing sets to pounding nails and pulling it together, from make up to running a spotlight, from running the soundboard to, finally, taking the stage.

In fact, these days, AFD Theatre provides a second home, where he has good friends and a whole lot to do. He's been active at the theater for more than 30 years, and lately his commitment has grown even more. Since he retired three years ago, the theater is his main activity and his first love. "You do have to love it," he says, "especially at the community level, we're here because we enjoy it. We all want to be part of an active group of people who are making theater. It’s about companionship and involvement."

Had no plans for 'Piazza'

He wasn't planning to audition for "Piazza," but when the call came out for male singers, he jumped in -- after he'd made sure there'd be no dancing. "I can't dance at all," he says. "In one production, I had to move around, and the poor woman who was my partner had to drag me around the stage."

That said, however, he can sing.

"Although I haven't had any real singing lessons, I can read music, and I have a pretty good voice." The music in "Piazza" is challenging and complex, but also rewarding, and Charlie reacts to it warmly, having seen a "very good production" some years ago at Speakeasy in Boston.

The musical, based on the novella by Elizabeth Spencer, revolves around a lovely, innocent young woman and her mother, two Americans on holiday in Florence in the early 1950s. When a gust of wind lifts her hat, it sparks a string of events that lands her in the arms of a charming young Italian man, and her mother has to struggle with the pains and joys of letting go and moving on.

The play is funny and touching, the music is lushly melodic and the warm glow of Italian days shines through the innovative set and lighting. The musical won five Tony Awards and the affection of critics and audiences.

Charlie has high hopes for this production: "There's a good feeling in the cast, it's an enjoyable show." He has effusive praise for the cast, which features Karen Fanale, who recently starred in AFD's production of "The Graduate." "I co-designed the set for that," he notes, "And worked with her in 'A Little Night Music' as well."

Charlie's long theater career began at Cambridge Latin High School back in the day. "I was mostly acting and singing back then,” he says, “I was Jack in 'The Importance of Being Earnest,' and had a role in 'Half a Sixpence'."

After graduating, he spent a summer apprenticing at North Shore Music Theater in Beverly. "I learned so much there," he says. "I lived in a rooming house, and worked with the professional carpenters; I learned the nuts and bolts, like cutting and painting."

Then he headed to Cal Berkeley, where he started as an English major before switching to theater. "I was in a few plays at school, and then I headed back to Boston, hoping to make it as a professional actor."

He spent time at the old Lyric Stage in the 1980s, a tiny theater above a hardware store on Charles Street. He appeared in "The Show-Off," "Antigone," "Touch of the Poet." He eventually decided not to pursue a professional career on stage -- "I didn't want it badly enough to make all the sacrifices" -- and took a short break.

He eventually decided to jump back into it, and enrolled in the dramaturgy program at UMass Amherst. He completed two of the three years, until he ran out of money and realized he wasn’t interested in becoming a teacher.

When he returned to Boston, he took a full-time job at MIT, where he worked for 26 years in the development department.

'Threw himself' into AFD

In 1986, he found himself at AFD Theatre, and threw himself into the challenges and satisfactions of a busy community theater company. He started out in "The Rope Dancers," directed by Dot Santos. He's been active on and off since then, and has done nearly every job in a production ("I usually help build the sets, no matter what").

He witnessed all the changes through the major renovation that transformed the lobby and the workshop. He notes that the technical capabilities have grown more advanced since he began. "Everything is more sophisticated now," he says. "The lights, the soundboard."

One of his favorite productions was "Titanic," in 2004. "I played about five parts in that one: the guy who runs down the aisle at the beginning and misses the ship, the engineer who builds the ship, a steerage passenger, a gambler and a blowhard English soldier. It was a tremendous production."

He's also appeared on stage in a scene from "Last of the Red Hot Lovers," as well as "Kiss of the Spiderwoman," "Mystery of Edwin Drood" and, most recently, he played Cecil B. DeMille in last season’s "Sunset Boulevard."

He did stage design for "Enchanted April" and "To Kill a Mockingbird," which required five little houses and then a courtroom.

"I've also served on the Play Reading Committee, which is an interesting challenge" he says of the committee that chooses the plays for the season. "We have to find plays that will appeal to everyone: old chestnuts for our regular audience, new stuff to appeal to new people, productions that can involve kids. He shows up to help build sets for most of the productions, but says it’s getting harder to find people willing to help. Many folks expect it to be as portrayed on TV.

"They think it will be glamorous," he says, "but it's really about hard work, diligence, reliability."

And it's difficult to find people with the right skills (carpenters, electricians, painters) -- "people don’t take shop anymore. When we build a set, it doesn't have to be as strong as real construction, but it does need to be solid and look good."

Part 1: A look at Suzanne Reese-Mills