Teen filmmaker plays part in 'Voices of Our Youth'

UPDATED, Nov. 2: "Every Body's Business" by Amilieyon Pridgen and Jessica Torres, a 2019 eight-minute documentary, from the Maysles Documentary Center, in New York, has its Massachusetts premiere at the Arlington International Film Festival, where it has been chosen as best documentary among films by youth.

The presentation, sponsored by festival supporter YourArlington, is part of the "Voices of Our Youth" program. The publisher reached out to filmmakers Jessica Torres and Amilieyon Pridgen to learn more about the film, and Torres responded.

"This documentary was truly my first introduction into filmmaking where I used a real camera and professional editing software," wrote the 18-year-old Puerto Rican living in Harlem, N.Y.

Asked about the goals she had for the film that she helped create and direct, she wrote: "I hope this film helps those who struggle with their own body and know they are not alone.

"I also want it to inform those who may not know to the extent that [concern about] body image can damage one's self-esteem."

Does the film succeed in accomplishing those goals?

"I definitely think that this film achieves those two goals, at least from the feedback we have received," she wrote.

Asked what spurred to make films, she explained, "When I was younger, I loved creating short films using my mom’s phone and iMovie.

'One of best programs'

"The Maysles Documentary Center [which supported the young filmmakers] was one of the best programs I have ever been a part of. The mentoring there is amazing, and I wouldn’t have grown as a filmmaker if it weren’t for that program."

After work at Maysles, she has taught her own film class to 14- to 16-year-olds through the New York Police Department Options Program.

"Voices of Our Youth" is a short program that wanders through various genres, styles and topics that have captured the attention of our youth via 23 independent films from around the world. They are from Australia, Canada, Germany, Iran, Nigeria, Poland, Spain, Ukraine and the United States (California, Florida, Massachusetts, New York and Virginia). Many of the filmmakers have recorded introductions.

The festival is online from Nov. 4 through 14. Preview here >>

About its choice, the jury said: “This documentary is beyond its director’s years. There is great beauty and elegance in the way these mature topics of body image and growing up femme are presented. The subjects and cinematography in this film are what really bring it to life -- it is simply stunning.”

See shots from the documentary >>

"We are proud to announce the winner of the student submissions in the category of documentary, and thanks to you and Yourarlington.org for supporting, recognizing and fostering the young talent creatives," festival organizers April Ranck and J. Alberto Guzman said in a statement.

The Arlington International Film Festival (AIFF) has announced the 2021 High School Filmmaker’s Program, “Voices of Our Youth,” which will screen at the November festival. This year’s program will have a greater focus on engaging young audiences with topics as women rights, comedy, love, family, human rights and music. 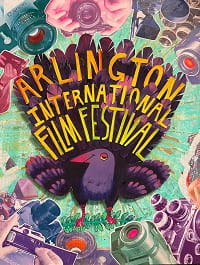 AIFF is delighted to recognize the creativity and talent of these young filmmakers who have demonstrated the power to capture their experiences and world views, delivering short films despite the challenging year of the pandemic. The full program will be streamed online Nov. 4 through 14.

Film submissions for these films were reviewed by these judges -- Jaina Cipriano, Padriac Farma, Christina Oniel and Hamed Soleimanzadeh.

Special thanks to the sponsors of “Voices of Our Youth.” They are Arlington Community Media inc. (ACMi), Code Ninjas, Kumon of Arlington. Cultural Council, Urban Media Arts of Malden and YourArlington.

Jury statement: “Memories of the past are romantic and beautiful in film; love – music – scenes and times are the components of this film. Love the best medicine for the rhythm of memory.”

Jury statement: “This is a beautiful piece. love how it transcends language. There is a lot of talent here, and I would love to see what you do next. The message is only rivaled by how the message will remain in my mind.”

Awards: He is a laureate of many competitions for children and youth animation in Poland and abroad.

Jury statement: “Powerful! This hits all the marks for advanced film knowledge. It kept me on the edge of my seat for the entire time. Completely executed and well produced film. Congratulations! Keep making films!

Jury statement: “The film touches on a sensitive, yet universal subject - the loss of a sibling in a creative and unique way. The director understands the importance of a twist, a tool used by greats such as M. Night Shyamalan and Park Chan-Wook.”

Jury statement: “I love seeing musical pieces in this festival. I got a sense from the very beginning that there was more to come, and it paid off very well. The technical aspects of the film lived up to the wonderfully performed choreography and acting.”

Jury statement: “A music video that follows the journey of a young girl searching for her lost friend and reflecting on the memories they once shared. Good cinematography.”

Jury statement: “After the assaults and discrimination of Asians because of Covid-19, this film shines a light on what it is like be a “model minority” in an increasingly divided America.

Jury statement: “Very powerful. There's a simplicity to this piece in the way the visuals unfold, and it really pulls you into the story. I found myself deep in my emotions just hearing you speak. This is a very rare ability for a filmmaker, and you have it! It makes me wonder what other thoughts and observations you have. It makes me want to learn more about your story, and maybe you will share more of it later in life. Just know that you have a strong voice, talent, and a unique ability to move an audience. Keep telling stories!”

Jury statement: “The producing in this film seemed to put it over the top. Watching it, I felt like there was a lot of depth/context in the story that made it deeply personal, but I never quite found out what it was - but the way it was filmed, I was okay with it. I love when a film is so deeply tied with the music as well. Very well done.” Keep using your voice!

Jury statement: “It is clear the director has developed a style. 'Magic Head' tackle’s mature themes of morality and consequence. The film feels like an interpretation of god’s power and hold on the world “

Jury statement: “Loved this! A great cultural insight. The animation not only stood alone as great, but the mixture of audio, angles, and lighting really made this immersive.”

Jury statement: “Surrealism of a girl’s night out - this short is the dream that becomes your teenage years once there is distance between. These filmmakers draw you into their world and hold you tight until they decide to release you.”

Jury statement: “A good accomplishment of an ambitious film! I was engaged the entire time, and I thoroughly enjoyed it. There are some advanced techniques in here that work well; with a bit more experience with lighting and editing, you'll be able to do an even better job next time. It feels like this could be tightened up a bit to be shorter, but that experience will come with time as well. Keep making films!”

Jury statement: “This documentary is beyond its directors’ years. There is great beauty and elegance in the way these mature topics of body image and growing up are presented. The subjects and cinematography in this film are what really bring it to life- it is simply stunning.”

Jury statement: “What a great message! Easy to follow, and enough left to think about as an audience member. This is a great effort and hit on all elements of technical requirements. Well, done! Keep using your voice!”

Jury statement: “This is great! I felt like the ending needed one more beat to show the change in the main character, but other than that, this is a very well-rounded film. Keep working on audio recording and editing, and you'll be well rounded. This is a great film. Congrats!”

Jury statement: “Such an important topic! Phenomenal research on this. The story moves along very well, and the depth of research and footage is inspiring and quite the feat! We need more films like this out in the world. Keep using your talent and keep telling stories/advocating!”

Jury statement: I think this film is an example of how the medium helps others. I think we all feel this way at one point or another and watching you walk through the process of acceptance, even just for a moment, helps others find the other end of perfection as well. You have a strong voice and I hope you keep making films!”

Jury statement: “Aside from the audio (difficult to hear the voice-over) there is a lot of technical mastery displayed in this piece. The visuals, and the editing made this a solid piece. Keep making films.”

Jury statement: “Love to see the work coming from this organization. Thank you for being vulnerable enough to write and share your story. There is a lot of talent here, not just in filmmaking, but in storytelling. Keep building, keep getting better, thank you for sharing!”

Jury statement: “Really interesting take on a silent film. It obviously has no speaking parts, but it doesn't feel like a "silent film exercise." I was interested the whole way through, and the filmmaking techniques really complemented each other. Well done!”

Jury statement: “'Zoom Dating' took something I am sure we're all sick of by now, video chatting, and made it fresh again. Vulnerable subject matter meets hilarious characters and together they create a short that keeps you on your toes. This is a great production, including the special guests. Good casting. Comedy is hard to write, and I think with more experience you will come to learn its unwritten rules.”

This news announcement was published Sunday, Oct. 3, 2021. It was updated Oct. 8, to add link to festival preview, and Nov. 2, to add responses from filmmaker.