Chico Freeman, Makanda Project to jazz up AHS in '19 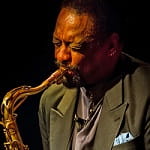 Presented by Arlington Jazz, the event had general admission of $20, seniors $10 and students are free.

The Makanda Project, highly regarded for its dedication to exploring and performing the previously unrecorded compositions of Boston native Makanda Ken McIntyre, has also been applauded for undertaking the work of other renowned jazz masters.

With funding made possible by a grant from the Boston Foundation, the project has invited Freeman, one of the world’s leading tenor saxophonists, to join them as they embark on presenting a program consisting entirely of selections from Freeman’s extensive catalog of compositions.

These new arrangements are to be the first Big Band adaptations of his work.

For the Arlington concert, only the second time the project has performed west of Boston, the following musicians will be joining Freeman:

Freeman is the son of legendary saxophonist Von Freeman and a product of Chicago's famed Association for the Advancement of Creative Musicians. He arrived on the New York scene in the late 1970s and immediately established himself as one of the leading tenor saxophonists of his generation.

Since then, he has worked with a long list of jazz greats, including Elvin Jones, McCoy Tyner, Dizzy Gillespie, Jack DeJohnette, Sam Rivers, Sun Ra, Wynton Marsalis, John Hicks, Mal Waldron and Bobby Hutcherson, as well as leading musicians from other genres, such as Memphis Slim, Tito Puente, Earth, Wind & Fire and the Eurythmics.

He has also been a prominent band leader. He has recorded more than two dozen albums, mostly featuring his own compositions, including classics such as "Kings of Mali," "Destiny's Dance" and "Spirit Sensitive."

He also organized the all-star groups the Leaders and Roots.

The Makanda Project was formed in 2005 to play the previously unrecorded compositions of McIntyre (1931-2001). The 13-piece group includes several of Boston's leading jazz musicians as well as some top musicians from New York.

The Makanda Project has been presenting its own regular series of free concerts in Roxbury for over a dozen years, and through them has developed a strong local following and reputation. Pianist and leader John Kordalewski also functions as the group's arranger.

To date he has arranged over 50 McIntyre compositions for the band along with some works by other composers. Recently Kordalewski has begun working with Freeman to create the first Big Band arrangements of Freeman’s music.

The nonprofit Arlington Jazz is coordinated with assistance from Arlington-based Morningside Music Studio (morningsidemusicstudio.com) under the direction of Dan Fox, a town resident who is also a multi-instrumentalist and music educator.

The Arlington Jazz Festival has been held annually since 2012 during a week in the spring. In 2019, Arlington Jazz expanded its programming beyond the yearly festival, presenting a series of additional workshops and concerts now throughout the year.