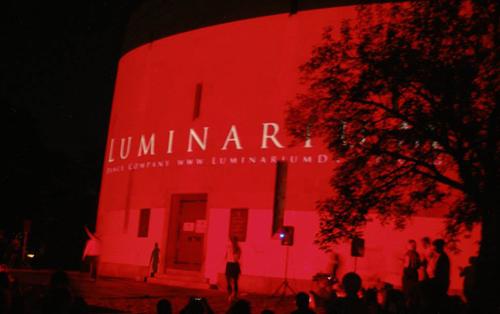 UPDATED, Sept. 10: With a near-full moon looming above the Boston skyline, Arlington's landmark Park Avenue water tower offered its own evening vision on Sunday, Sept. 7 -- a backdrop for dance and video.

An estimated 250 people heard recorded jazz and watched in the cool dark on chairs and blankets as mosquitoes zeroed in. What they saw had never occurred before in Arlington.

Projected on to the east side of the 80-foot tower were shadows of children improvising as well as seven members of the Luminarium Dance Company of Boston as it debuted its evening of dance, art and video, called "Night at the Tower."

After dancers leaped and then curled into a variety of acrobatic positions, 40-foot-high video projections bathed the historic water tower in 75 images of Arlington, culled from an Arlington Center for the Arts' collection.

"This event is the first event of its kind in Arlington, and is the first public performance ever held at the water tower," co-director Merli V. Guerra wrote in an email Sept. 8.

The local arts council supports public programs in Arlington that promote access, education, diversity and excellence in the arts, humanities and the interpretive sciences. It is a local council of the Massachusetts Cultural Council.

Founded by Guerra and Kimberleigh A. Holman, Luminarium is in its fourth season. Luminarium is a 501 c3 nonprofit organization, and this event served as the company's cultural community outreach project, led annually by Guerra.

The event was free and open to all ages. It had been postponed from Sept. 6 because of rain. For more, see merliguerra.blogspot.com/

See a slide show of photos >>