Display in lobby at Dearborn Academy shows how mural looked from 2008 to 2013.

The push for public art in Arlington, launched seven years ago and pursued in earnest beginning last year with fund-raising success and a large mural at the Boys & Girls Club, has hit a glitch: Art in town needs a clearer path to revere current creative expressions.

Consider the mural painted by Dearborn Academy students on the MBTA bus depot in Arlington Heights in 2008 and publicly honored that year. Through a series of miscommunications and the lack of a process to acknowledge its value, the mural has fallen victim to a contractor's work to construct a convenience store at the site.

"Quite disappointing," said Tova Speter, the artist who guided the project. She said her comment reflected her own feeling and also expressed sadness on behalf of the students who worked so hard to create the mural and the greater Arlington community who have lost the first community public art in the town. 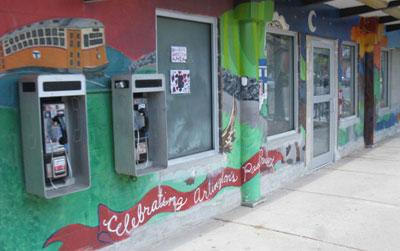 How mural looked April 29, 2013: in reality at Arlington Heights depot.

"I don't know that we could have saved it .... There was no policy, no guarantee that it would be permanent," she said. There should be a public event to say goodbye, one of a number of suggestions she made this week.

Instead, at some point this winter, a contractor opened up holes for four windows and a door for a new convenience store at the dowdy depot at 1389 Mass. Ave. They cut through the artwork of as many as 25 Dearborn students and threw away the pieces. Ironically, that includes an image of Uncle Sam riding an eagle below the words "Entering Arlington."

A communication breakdown between the town planning office and the MBTA led to the altered art, Speter said.

Addressing the question of whether Arlington is an art-friendly town is the town's fledgling Cultural Commission, whose members received a lengthy statement Thursday, May 2, from Scott Samenfeld, a commissioner who has resigned over the matter. Samenfeld documents his efforts to bring town officials into the process in the past two months, with insufficient success.

After the mural was discovered defaced in early March, members of the 2-decade-old Arlington Cultural Council expressed initial outrage. After all, a council grant had supported the mural work in 2008. Equally appalled were Speter and Howard Rossman, director of Dearborn.

Those feelings festered while the cultural council decided what might be the most productive approach. Council member Kurt Fusaris pursued a letter to the media, but it was put on hold. Samenfeld enlisted Selectman Joseph Curro Jr. and tried to involve Carol Kowalski, town planning director, the latter without success.

YourArlington asked Kowalski to discuss the issue in March and was told to talk to the MBTA.

The issue at last came to a head publicly May 2. Following her chronology, here is the story that Speter told the Cultural Commission meeting:

A Somerville artist and art therapist who works with at-risk youth, Speter began planning a public mural in 2006. She overcame initial hesitation and concern at Town Hall, negotiated the MBTA bureaucracy, secured a grant from the local Cultural Council and enlisted Dearborn students. It all came together in a successful project that was dedicated with the T's top executive in 2008 and was honored in 2009.

Students gave a dead spot in the Heights some color.

"Up as long as possible"

"It was to be up as long as possible," she told the commission May 2.

Her story takes a fast-forward to last November. She said Kowalski called her and said "something could be happening" at the depot.

At that point, Speter said, she went back to all of her MBTA contacts, some of whom had changed since 2008.  All told her: No plans to change the mural at site.

She let Kowalski know. She said she received no response.

Speter heard nothing until March, when she learned that during construction of a convenience store called The Right Spot, to be managed in half of the depot space by a person who is legally blind, workers had severely altered the mural.

At the point, she went to back to the MBTA contacts, who said they did not know about the work and chalked it up to "miscommunication."

Asked for a copy of the contract between the artist and the MBTA, T spokesman Joe Pesaturo wrote in late April: "I have spoken with a number of people here ... and staff is not aware of the existence of a formal agreement."

Told that, Speter wrote: "We did have a 'Temporary Art Project Approval Form' and 'License for Entry' as well as a letter from the MBTA giving their approval for the project.

"The nature of the documentation, however, did not include information about how long the mural would stay up, just that it would be kept 'as long as possible,' because that is the nature of the MBTA - they cannot (understandably) agree to maintain a mural indefinitely. We also had 1-2 MBTA employees on site with us for most of the painting days ...."

Completion of the convenience store, a project of the Mass. Commission for the Blind, is expected at the end of May. The building permit lists the contractor as McDonald Home Improvement, 263 Kennebec St., Hyde Park.

On March 20, YourArlington asked Fabian DePeiza whether the Commission for the Blind knew about the mural.

Only Levy responded. On March 21, he was asked whether the commission knew about the mural. He said he would have to ask.

Four days later, Levy responded, saying that, no, the commission did not know about the mural.

What lessons learned, what can be done?

Those gathered offered the following possible steps to protect works of art:

-- Designate a contact person for public art in town. Mann asked Speter to be involved in the process.

-- Make clear the connection between public art and the Town of Arlington.

-- Seek a way to provide funding to maintain public art. The Mass. Commission for the Blind has suggested it could make items to sell, such as greeting cards, that would have images from the mural on them. Those items could be sold, and the proceeds returned to a public-art fund.

-- Invite Dearborn students to be part of another mural effort.

-- The Arlington Cultural Council needs to inform the state council about what occurred.

-- A letter from cultural groups describing what has occurred and steps to move ahead should be sent to area media.

-- Improve communication among all stakeholders.

This story was published Saturday, May 4, 2013, and updated the next day to add clarifying language.