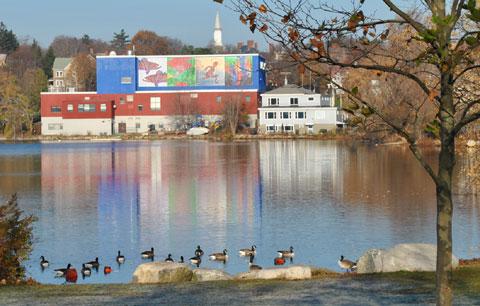 The weather cooperated Sunday, Dec. 9, for a beautiful celebration of the new Spy Pond mural, the largest piece of public art in town, hanging on the Boys & Girls Club wall overlooking Spy Pond.

Three of the four young artists involved in the mural were also present to receive congratulations and to finally see their creations supersized.

The project, in the works for about two years, was funded by members of the public.

Much of the fund-raising was done by Artbeat and Chairful Where You Sit this past summer.

The mural represents the kickoff of a public art initiative in Arlington.

Arch said the dramatic mural was printed and hung on the weekend of Nov. 17.

The 25- by 100-foot digital mesh mural featuring images inspired by the natural and recreational resources of Spy Pond and printed by Arlington Banner & Flag, adorns the side of the Arlington Boys and Girls Club building overlooking Spy Pond.

"We are indebted to David Ardito, Adria Arch, a representative of Arlington Public Art, said earlier, "... for facilitating the mural images and to the students whose work will be displayed for all to enjoy."

The four young artists, two of whom are now in college, were to be present at the reception. They four are Jordawn Moses, Jobada Kachi, Lydia Genard, and Claire Stevens-Luneau.

The mural is the result of a fund-raising campaign to raise awareness and interest in public art in Arlington.  By the end of August, $7,000 had been raised.

It is the product of a successful collaboration between many groups in town, including the Center for the Arts, Arlington Vision 2020, Arlington public schools, Arlington Planning Department, the Boys & Girls Club, Friends of Spy Pond Park, and numerous businesses and individuals.

Fund-raising for the mural included this summer’s Chairful Where You Sit, a pop-up installation of chairs displayed on the Minuteman Bikeway. More than 30 local artists donated their time and talents to reinventing used chairs  that were available to the public for a donation of $100.

Currently, public funds are not yet available for public art, but many businesses and residents have contributed generously to the project.
In the spring of 2011, Arlington High students were invited by Arlington Public Art to submit an image to be selected for a mural overlooking Spy Pond. Four images were chosen from more than 60 entries by Arlington High School students.
Student artwork for the mural was chosen specifically to highlight the artistic talents of our youth and to engage the community in supporting youthful creativity.  Rather than choose an image by a professional artist, APA felt that youth-generated imagery would be more easily supported by residents.

Images generated by young people, many who have fond childhood memories of Spy Pond and the Arlington Boys and Girls Club, seemed especially appropriate for the setting. The eye catching, colorful mural covering the large blue wall next to Spy Pond, will enliven the view from the bike path, Spy Pond, and surrounding homes, and attract visitors to Arlington.