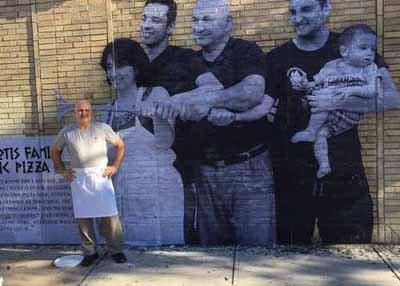 Tom Vakalfotis in front of an his image at Olympic Pizza.

UPDATED, Nov. 5: Olympic Pizza has been at Cleveland and Mass. Ave., for 47 years, and it was the second business in East Arlington to tell its story in October, as a number of others followed.

When you are there, read what happened after Tom Vakalfotis bought the spot across from Fox in 1996. Here is the account written by Moochhala >>

Reported Oct. 2: Maybe you're walking into church at Trinity Baptist, and you look over toward Maida Pharmacy on Windsor. Is that Larry pasted against the wall? Yes, it is.

Lawrence Maida, writ large, is the first business owner to be memorialized -- temporarily -- by "East Arlington Stories," a project of Arlington Public Arts.

He went up, piece by piece, on Friday, Sept. 30, as artist Douglas directed installation traffic. Helping to bring Maida to life were Roth and volunteer Grey Held, of the Newton Cultural Council.

Part of a project that is expected to last as long as the weather allows, perhaps through November, the effort highlights the people behind East Arlington's small businesses. Public art brings them out from behind the counter to you. 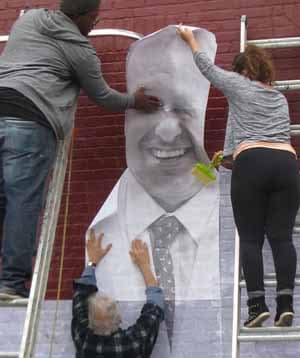 Image of Lawrence Maida is installed on a wall at his pharmacy. / Bob Sprague photo

The larger-than-life images, accompanied by brief text, are put in place using wheat paste, an adhesive made from wheat flour or starch and water used since ancient times various arts and crafts. Have you papered walls at home? Your hands have gotten sticky with something similar.

The common substance adheres to create an impression that goes beyond mere "decoration." Head down Mass. Ave. past Capitol Square and take a look.

Soon, you will see further stories -- at Olympic Pizza, at Za and at the Cambridge Typewriter Co. And more.

Cecily Miller, the consultant for the project, said the public is invited to participate in an unveiling of the effort on Saturday. Oct. 15, at the Fox Library, at times to be determined. She called it "a public day," with a chance to meet the creative force behind it, Douglas.

She said the idea for "stories" came about during the Mass. Ave. Corridor project, in East Arlington. Residents asked: Let's include public art, but what, were and who will pay?

Help on the funding front was a $5,000 grant awarded this summer to Arlington Public Arts from the New England Foundation for the Arts.

Other questions received answers during planning for the Fox festival, which was part of last June's Feast of the East.

Each location would have an image with excerpts of the story about each.

Publication of full stories is expected Nov. 5, in The Arlington Advocate, a project partner, as well as on the APA's project website.

Nilou Moochhala of Arlington was not present for the wheat-pasting Sept. 30 but is writing all of the interviews into portraits.

Learn about Cedric Douglas on Facebook | NEFA: Up Walls