'CURRENT' CIRCLES: Vasello embraces sticks, and so do Ottoson students 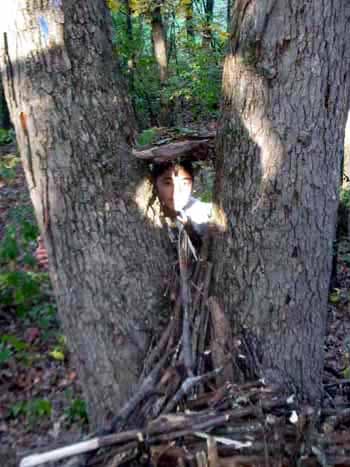 Jay Saliev, 13, peeks from beneath a small platform he made between splitting trees.

In your community, certain circles have people who you hope will include you.

In a whirlpool, the water circles swiftly, so fast sometimes that you'd rather be excluded.

In his essay "Circles," Emerson's wrote: "The eye is the first circle; the horizon which it forms is the second; and throughout nature this primary figure is repeated without end."

So can the hard heart of stray sticks take the shape of a circle, or at least a sinuous shape? If arranged with a careful combination intent and intuition, they can, and that illusion is behind "Current," the final art installation celebrating the 25th anniversary of the Minuteman Bikeway. "Current" is an environmental sculpture, a work of land art made entirely of natural materials and arranged to complement the contours of a hillside bordering the busy bikeway.

Go see for yourself what Provincetown artist Frank Vasello hath wrought along the stairway that descends from the bike path to Spy Pond, near the playground.

On this sloping site, sticks collected in the woodsy area nearby have been assembled into pleasing shapes. Depending on your viewpoint, these sculptural contours could suggest the flow of water. That makes sense, because, just beyond the whorls of sticks is the glitter of Spy Pond.

The Provincetown artist, who is 54, and has been making environmental works since he graduated from MassArt in 1987, aims to "take something static and giving it a sense of motion."

He appreciated the site chosen by Cecily Miller, the consultant helping Arlington Public Art, because of its strategic location and its public accessibility. 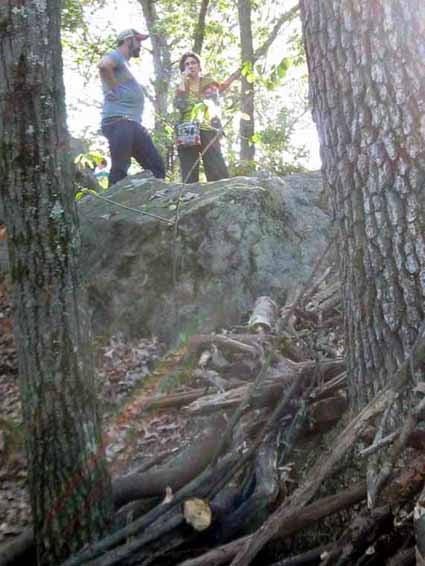 Land artist Frank Vasello confers with Cecily Miller, arts consultant, during a project involving Ottoson students in the woods behind the middle school.

Vasello did not only fashion stick sculptures near the pond. He also brought his large frame, cordial demeanor and environmental viewpoint to after-school arts clubs at Ottoson in October -- first, with an indoor slide talk that put his work in the context of Andy Goldworthy and other contemporary sculptors and then with an outdoor participatory project -- a sculpture built with the students in a magical spot in the woods behind the school, once known as the Crusher Lot.


In the 1800s, that area -- specifically where the middle school stands -- was used to excavate stone, which was fed into the town's steam-powered crusher to make gravel, used for town roads.

Creativity in the Ottoson woods

The stones and crushing ended long ago, but creativity awaited in those woods. Three Ottoson art classes found it with Vasello's help at a clearing not far from Gray Street.

Fifteen students collected sticks, directed by art teachers Polly Ford and Kayla McKenna. A third teacher involved, Alicia Serafini, was not there that day. The day before, 25 students had participated.

They could have been Scouts building a campfire. No, they were youngsters involved in "land art."

Miller strolled into the slanting autumn light of the woods. "Looks great," she said, admiring the 25-foot sculpture, which worked its way down a hill, around some rocks and through a notch in a double-trunked tree.

As students brought in their collected sticks -- ranging from 8 inches to 5 feet -- Vasello pointed the way: Make it "like a river ... give it some flow."

Miller noted emerging research about how beneficial it is for people's health to spend time in a woods, not just because of the beauty of the setting but also because of new research revealing that trees release chemicals that have a positive effect on humans. The Japanese seeking out time in the woods, calling "forest bathing."

The students listened to the artist's directions -- assemble the sticks without the common binding elements (no nails or twine). They also went their own ways: Some advocated moving away from the ground, having sticks "crawl" up a tree.

Zhkhongir Saliev, 13, who is known as Jay, made a small platform between splitting trees. The native of Kyrgyzstan  called it a "house," or a shelter "for a fairy." He placed a handful of acorns on the top, he said, to show that something small could lead to something larger.

As Miller filmed with her phone, he said his creation "comes from your heart." He would like to become an engineer.

WHAT IS THE TAKE-AWAY?

In a follow-up interview, Vasello was asked what a should viewer take away from "Current"?

Calling it a tough question, he would allow only that his outdoor installations tend to be more playful, his indoor work "more somber." Read for yourself his statements about two works done more than a decade ago for the Forest Hills Educational Trust, where Miller got to know him, when she commissioned two large-scale works for the grounds of historic Forest Hills Cemetery in Jamaica Plain

"I respond to a sense of place," he said. "I make changes [to a piece] depending on the environment .... The space the work is in dictates."

Vasello was in Arlington during seasonal downtime. After Provincetown is drained of tourists in fall, he can escape his day job at Relish, the bakery and sandwich shop he has owned and run since 2001.

He is also an actor and film director ("Offseason," 2015), a five-year effort with filmmaker partner Nathan Butera.


"How fantastic for the students," Miller said of the scene around her, to have a woods so close to their school, and to spend time with a working artist whose chosen media is nature.

The "Current" near Spy Pond had flowed uphill to Ottoson. In Arlington, a suburb whose backbone is a bikeway, art and nature continued to confound commercial forces.

Relish: It's About the Cupcakes, Stupid! One New England, 2012