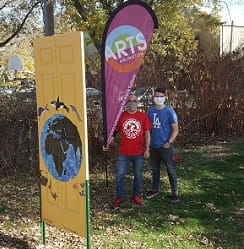 Artfully painted doors are cropping up along the Minuteman Bikeway in Arlington, and indeed, all the way through Battle Road into Metrowest, in a preview of a new collaborative regional public-art exhibition, “Go Out Doors - Neighbors.”

Installed in three Arlington locations are:

From the Arlington Commission for Arts and Culture newsletter:

Holidays Season Newsletter from your friends at Arts Arlington

Art opportunities are popping up all over town! Your support and encouragement of local artists makes a difference!

The Arlington Commission for Arts and Culture and the Gracie James Foundation have announced the sixth Youth Banners Initiative, for 2021. Every year, beginning in 2016, teens have been invited to submit designs for banners.

The commission invites invite students in grades six through 12 who live or attend school in Arlington to submit creative and thoughtful artwork for the banners. The theme this year is "Protest: Lifting Voices."

Those involved encourage you to think about being a voice for change: What do you wish to protect and to speak for? Possible subject include social, environmental and economic justice; as well as protection of the Earth and its wildlife. Here are the rules:

For 2020, 95 students submitted artwork to the Arlington Public Art's Youth Banner Initiative, and 20 designs were selected to be printed as banners and hung on light poles this spring along Mass. Ave. in Arlington Center.

To see all of the images, click artsarlington.org/youth-banner-initiative and scroll down.

Three Arlington-based panelists juried the artwork, including artists Pinal Maniar and Karen McCarthy and Tom Formicola, the new executive director of Arlington Center for the Arts. They reviewed the artwork based on two criteria: creative interpretation of the theme “cycles” and clarity of the image, because banners are viewed from a distance.

A reception to celebrate all participants is scheduled for Thursday, April 2, during Arlington High School’s annual art show. At that time, three scholarship winners and a People’s Choice winner will be announced.

UPDATED, Oct. 24: "Sculpture on the Bikeway," an installation for a community art project led by Arlington artist-in-residence Michelle Lougee, delayed its official launch and artist opening until Sunday, Oct. 24. It is expected to be live for a year. 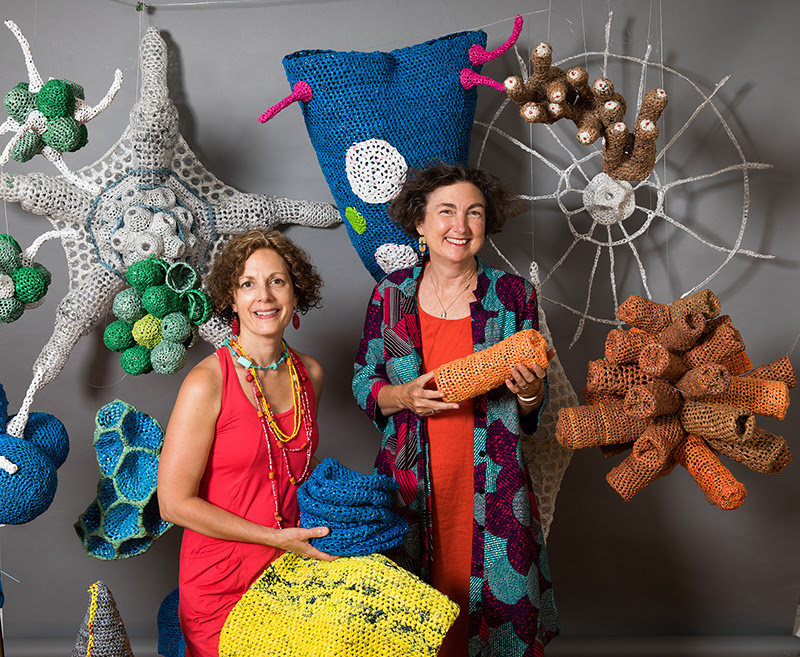 A number of colorful creations made through the efforts of our craftivist community, working with Lougee and Arlington Public Art Curator Cecily Miller, have been installed in trees along the Minuteman Bikeway.

These colorful sculptures are crocheted from plarn, a "yarn" made from plastic bags, and they resemble micro-organisms found in water. The project's goal is to raise awareness of the deadly impact of single-use plastic on environmental and human health. The project is called “Persistence: A Community Response to Pervasive Plastic”and is planned to be on display for a year.

In celebration of the 100th anniversary of the passing of the 19th Amendment and the successes of the suffrage movement, the Arlington Center for the Arts in partnership with the League of Women Voters of Arlington present "Created Equal," opening Friday, Sept. 25.

This exhibition -- juried by Jillian Harvey, diversity, equity and inclusion coordinator for Arlington, and Boston-area artist Liz Shepherd -- showcases artwork that exemplifies the mosaic of voices that contribute to our society and the equal weight all voices carry. Artwork in this exhibit address concepts of fundamental rights and freedoms in our society through a variety of subjects and mediums.

This exhibit, continuing through Nov. 6, honors the suffrage movement and the passing of the 19th Amendment, but it is not limited to this historic moment. It serves as a reminder that these rights are hard won and need to be protected and not taken for granted. The suffrage fighters give us inspiration, courage and hope to move forward and face the struggles we see in our community, our country and our world today. 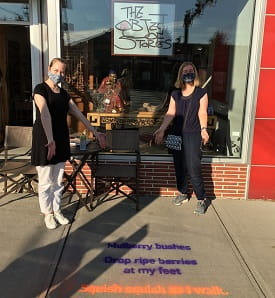 Sarah Morgan-Wu, left, owner of The Object of Stories gallery and one of two new commissioners being appointed to the ACAC this month, with Cristin Canterbury-Bagnall, commission cochair.
More photos here >>

UPDATED, Oct. 1: Arlington has been waxing poetic during the pandemic -- first through the inspiring series of Red Letter poems circulated by Town Poet Laureate Steven Ratiner and then by the multimedia collaboration of "Walking Poetry" installations on the bike path by visual artist Adria Arch and poet Jesse Brown.

Most recently, words began appearing on the sidewalks of the town's cultural district.

The Arlington Commission for Arts and Culture recently began installing a series of haiku collected during a 2018 project, Bikeway Haiku, which originally sourced the short Japanese-form poems from town residents on themes inspired by the Minuteman Bike Path.

The poems were selected by committee of three poets – Charles Coe, Grey Held and Gloria Mindock – and stencils were laser-cut by artist Liz LaManche.

This latest incarnation makes use of additional public-sourced poems that are colorfully stenciled onto the pavements on both sides of Mass. Ave., extending from Capitol Square in East Arlington through "the gap" in the cultural district toward Arlington Center. 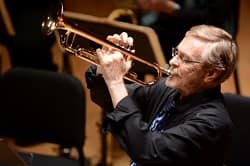 The Aardvark Jazz Orchestra,  led by Mark Harvey of Arlington, celebrates its 48th season this fall, its first virtual season.

To begin, watch an archival video from Aardvark’s 2012 show at Scullers >>  Cantata Tubulidenta (Parts 1 and Part 2), Mark Harvey’s humorous suite, literally “The Song of  the Aardvarks.”   Many thanks to Tom Hall and ImprovLive 365 for the videos.

Upcoming highlights of our 48th Season:

SIGNS OF TIMES: Take a walk, read some poetry 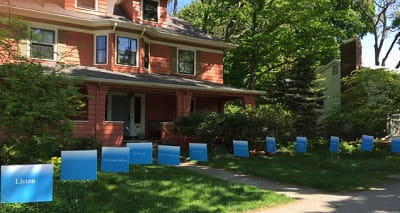 Have fears of Covid-19 brought you down? Need a lift?

Take a walk in Arlington and savor some wisely chosen words of the "Walking Poetry Project," an environmental effort by town public-arts advocate Adria Arch and poet Jessie Brown. The project is "on the move" placed temorarily at various locations around town, so try to keep up.

One spot, at 274 Park Ave., in the Heights, asks you to pause and practice gratitude. Called "Listen," like other project installations, it merges words and art in a more serious rendering of the old Burma-Shave roadside ads. It asks: 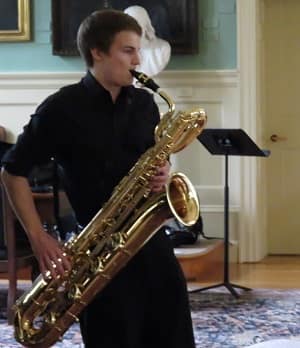 Students have been working hard to prepare this exciting musical concert featuring a performance of Mendelssohn's Violin Concerto by AHS Performing Arts alumnus Bennett Parsons on soprano sax with the AHS Chamber Orchestra under the direction of Sabato "Tino" D’Agostino.

The concert will also feature some original compositions and performances by current AHS Music Technology and AHS Instrumental ensemble students.