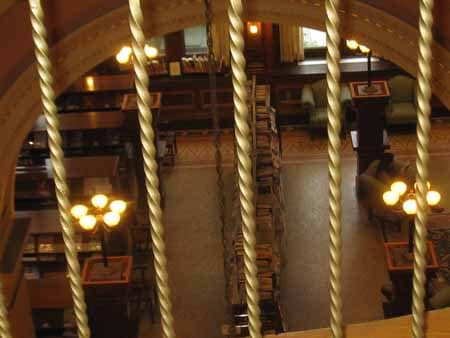 View from the 'bridge': The main reading room at Robbins Library as seen from the floor where the administration toils. / Bob Sprague photos

Any library is an opening, a beckoning door: Come in and learn. Arlington's has a unique history.

Since 1807, the library in what was then West Cambridge welcomed the public. In 1835, Ebenezer Learned, a doctor, left $100 in his will to establish a juvenile section. Thus was born the first continuous, free children's library in the nation.

Come in and learn, we tell our children.

In 1892, a gift from Marcia C. Robbins in memory of her late husband, Eli, placed Robbins where you know it now and gave it its current name. The building held 60,000 books and cost $150,000. The front entrance was fashioned after the Cancelleria Palace in Rome.

Nearly a century passed. More people wanted to walk through that door -- and learn.

In 1988, after years of seeking grants, the town agreed to set aside $3 million for Robbins. A $3.3 million state grant and a community raising $500,000 launched construction. By 1994, a renovated Robbins doubled its original size. These days, the library system welcomes 300,000 visitors a year.

Now what? Those leading Robbins -- listed on the National Registry of Historic Places -- and its branch, the Fox, in East Arlington, are asking the public: In what direction should Arlington's libraries go?

"My Boys" by sculptor Cyrus Dallin (1911) joins poster for teen summer reading challenge near checkout desk.  Consider the following outline of a plan for the future as Robbins turns 125 this year:

A working group expects to make recommendations to library trustees. That includes a coalition of representatives from the Friends of Fox and Robbins, the library foundation, town facilities, library staff and trustees.

This group, led by Libraries Director Andrea Nicolay, who is the project manager, is helping to guide process, including review of designs.

"It's going to take the time it takes," she said. 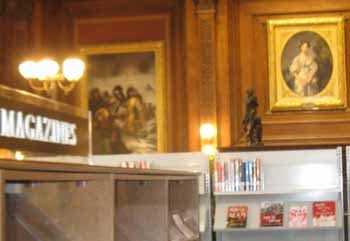 As to time, libraries are as old as human history. Indeed, they are keepers of our history.

So what would residents like to see happen with our own much more limited -- and yet important -- vaults of remembrance?

Nicolay answered that query in her office in June, and then residents had their say at two public meetings that month.

She's been weighing changes for the last two years, as reported in this 2015 feature story, considering what is occurring among libraries nationally.

Those who want to see how change translates should visit the Cambridge Public Library, which Ann Beha Architects revamped. Philip Chen, principal architect, and William Rawn both engaged in the decade of work. You can see some results here >> Nicolay calls it "quite stunning."

In musing about what might come next for Arlington's libraries, Nicolay said that both should have "intentional serendipity." That would be a browsing experience involving surprise and facilitating discovery. That might take patrons beyond the 141-year-old Dewey Decimal System.

She did not suggest it, but other libraries have followed the Book Industry Study Group system.

Nontraditional materials already in place are the Discover It Yourself collection in the Children's Room and the Library of Things collection for adults (e.g., sewing machine, camera), near the circulation desk.

Would tomorrow's Robbins and Fox mirror the experience of the falling down the rabbit hole of a Google search? Perhaps, but, one hopes, with guidelines to cushion the fall.

Of loosening the rules to allow the chance of discovery, Nicolay said: "I don't know how to design for that."

In two public meetings, many residents added their voices and suggestions in an effort to guide the architect. About 40 people were at Fox and 50 at Robbins; both addressed both libraries. In addition, by June 21, 370 had responses to a survey.

Here is a representative series of comments from both sessions:

WHAT TO KEEP AT ROBBINS

-- The beauty of its main reading room. One said she liked "the overall, grandiose feel when you walk in," including the paintings and sculpture.

-- Access to and the expertise of the librarian. One called the staff "unparalleled" in the help it provides. A comment, "We won't renovate the staff," drew laughs.

-- Respect for older architecture, as any climbing the staircase can see as you pass the exterior dating to 1892.

-- Availability of the Minuteman Library system.

-- The local-history and children's rooms

-- Quiet spaces, including the openness and study tables on the second and third floors.

-- Access to sources for job-seekers, which can lead to cross-pollination among age groups.

-- Rooms providing access to a broad array of constituencies.

-- Promotion of provocative books via the annual Arlington Reads.

WHAT TO KEEP AT FOX

Knock down Fox, then build it up?

Asked to clarify, she commented July 15 that she was not speaking in jest, but was suggesting a multiuse develooment. "If we knocked the Fox down and sold the space," she wrote in an email, "with the proviso that the developer has to fund a new library on the bottom two floors, we could potentially get a fabulous library at no cost to the town.

"I also strongly believe that Arlington would benefit from increased density in the corridor in general, and that the building that houses the Fox isn't a great building."

She wrote that she not alone in this view: "I first heard the suggestion from someone who is on the Friends of Fox.

"My biggest worry is that the Fox will be forgotten." She wrote that the group has raised money that they are eager to spend.

"East Arlington loves the Fox, and it is heavily used, partly by people who don't have easy access to the Robbins. I would love for the Fox to be transformed to an even more valuable space. This is one way to fund that dream."

-- Converted from old storefront, the branch location, saved from closing in the past, has many supporters who appreciate its open, family feel. "You see your kids when you're there," one said.

-- Convenient: neighborhood location, walkable. One called it a "quick in-and-out."

-- Its embrace of many cultures makes it "feel international."

-- The Little Fox Shop, a resale operation run by volunteers that supports the branch.

WHAT TO CHANGE AT ROBBINS

-- Keep the architectural details of the main reading room, but move or rearrange periodical shelving, which one called "cumbersome."

-- Improve parking, a perennial issue. One jokes that all who might have attended were not there because of the lack of spaces.

-- In the children's room, aim for softer furniture, more room between tables and find an alternative for the curved wooden bench, on which kids are tempted to run but are not permitted to.

-- The well-used Community Room is hard to find; improve signs. Access to it requires snaking through the library.

-- Teen space next to microfilm invites conflict between youth and quiet.

-- One termed the lighting "horrible," making the search for CDs, easy-readers harder.

-- Consider using the Whittemore-Robbins House front porch or room for a cafe.

-- Would serve public better if hours and children's programs increased.

-- Include maker space at Robbins or Fox (for arts- and crafts-building).

-- One woman called the artwork in the main reading room "racist," citing the painting portraying Columbus returning to the Spanish court after establishing an outpost in the West Indies. (The painting in question is in the background of this photo >>) She called the this and another work offensive, particularly in "our front parlor of the town."

WHAT TO CHANGE AT FOX 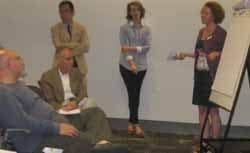 -- The overall space needs major upgrades, including improved access via the Americans With Disabilities Act.

-- Extending hours. Make them the same each day.

-- Install a counter near a window, to look out while working.

-- Quiet spaces for adults to work. One said, "Adults don't feel as welcome" in spaces that are good for children and families.

-- Consider the impact of the increased demand on Fox from Gibbs sixth graders.

-- Book drops at places other than at the libraries.

-- Library wi-fi between Robbins and Fox.

Total holdings at Robbins and Fox (includes physical books and audio/visual items only): 236,532

I see you over the tops of uneven books.
I see your golden brown hair,
as wild as the tall tundra grasses.
I see you drop the musty book,
onto the pale grey carpet.
And you are unaware, of my peering eyes,
sneaking glances from under my Algebra book.
And that the numbers are carved in my mind,
as if ingrained onto the bark of a dying evergreen.
PS700-PS3499 you are searching for great American poets,
as your hands glide over the worn leather covers.
Leaves of Grass, Sorrows Built a Bridge, Works of Poe.
As you glance at the Dewey Decimal Numbers,
Numbers flourish in my mind.
The probability that you would like me,
Numbers are more cohesive than the words
that I have written to you in the margins.
In the distance I see you surrounded by your books,
deeply focused-serene,I too am a poet,
I am a poet of logic.
Fixating on the truth showed by facts.