UPDATED, April 24: What if your childhood was snatched from you by a murderous regime -- as around you whole families were slain? Positive thinking alone would not be powerful enough to pull you through. 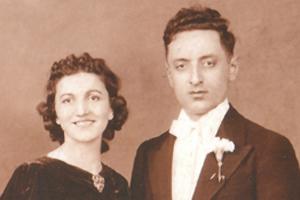 What would? Who can say what factors made Zaven Mirakian, orphan of the Armenian genocide, turn out to be John Peter Mirak, a prominent business success of 20th-century Arlington? His son Robert offers signposts to this transformation.

A century after Ottoman Turkish armies killed more than a million Armenians, YourArlington interviewed Mirak about his parents -- and his book, which provides insight about who they are.

You know the name from passing the widespread Mass. Ave. car dealership as you head toward the Heights. The Chevrolet or Hyundai ahead of you in traffic may bear the name atop its license plate.

Bob Mirak, Ph.D., wrote the book to bear witness to times both foul and fair that his family has experienced. It begin with the horrors of Armenia during World War I events that later were called a "genocide."

Born in 1933, Bob says the chilling events that lie behind that word were not discussed when he was young. It was "too painful to bring up," he said.

Both parents were orphaned by the events of 1915 and after. John was 8 at the time; Artemis an infant. Each was taken in by a Turkish family; each rescued by a relative and brought to America.

John grew up in Revere and Malden, graduating from New England Automotive School in Boston. At his first mechanic's job, he made $3 a week. His Arlington history began in 1928, repairing trucks for Arlington Dye Works, at a Mystic Street shop where Armstrong Ambulance is today.

Four years later, he and three other immigrants launched Arlington Center Garage and Service Corporation, at 440 Mass. Ave. On the site today lie the Legacy apartments, which Mirak built. Over that swath of more than four decades, you can see the arc of Mirak's influence on the town.

Framing Genocide Survivors is the story of Mirak's expanding business accomplishments, which blossomed into philanthropy. Throughout, a reader finds nuggets of psychology revealing how the past impressed the present in the family's lives. Here are some discerning snapshots:

-- When his parents lived in a three-story walkup in Somerville, Bob's first bed was a bureau drawer. "Although Artemis recalled that the bed was comfortable," he writes, with perhaps some self-mockery, "others attributed Bob's angular personality to his early experience." In the interview, the author says that, as the first-born, he was an organizer and liked to be charge.

-- Following World War II and into the early 1950s, his auto business revved along with the accelerating era, and John expanded his real estate holdings. A tinkerer and tech-savvy, his father was always a builder, Bob says, perhaps adding to his life the "territory" he had lost as a child.

-- Then, in 1953, brother Sooky, then a college student, was involved in a car accident that left him a quadriplegic. The book says the event "irrevocably scarred the family." The incident gravely affected Artemis, who suffered from depression. Asked whether he thought his mom's breakdowns were related to her childhood, Bob said he was "pretty sure" that when growing up, she was regarded as an outsider, because she had been an orphan.

-- On the other hand, he said his father remained less scarred. Always a fighter, John pushed on, moving his widening operations to the Heights in the 1970s. For Bob, the steady growth raises an issue of guilt, but one with a positive connotation. He said he thought guilt about being spared an early death in Armenia led his father to feel he was blessed. He said his dad felt the "town was very generous to him." He did change his name, as many immigrants did, but, Bob says, he did not face discrimination in Arlington.

-- John felt "indebted" to the town and to society in general. On the 50th anniversary of the genocide, in 1965, he ran an ad in The Boston Globe that began "Gratefully yours ...." Bob said his father offered gratitude to the region for allowing him to prosper.

-- The charitable work of the John Mirak Foundation takes us to the heart of Bob's book. That work includes establishing the Armenian Cultural Foundation along Mystic Lake as well dealing with environmental problems in Armenia, issues with children, helping priests in Watertown, aiding an eye-care project and school in Yerevan, Armenia's capital. It includes generosity to Arlington, as Bob served on the board of Symmes Hospital and donated the Jefferson Cutter House, where the Chamber of Commerce and the Dallin Art Museum are today, and the stunning main reading room at the Robbins Library.

Behind the charity lies a religious conviction, Bob's book says -- that his life had been spared "for some reason .... from gratitude, wonder, and probably survivor guilt, he felt compelled to repay society through donation and service."

-- A final family photo, this one provided by Bob's sister Muriel Mirak-Weissbach, who recalls with fondness of Sunday gatherings of adoptive families, usually unannounced:

"As soon as we arrived the ritual would begin .... For us children, the process was different, and somewhat painful. Both ... [uncles] had a habit of grabbing me by the cheek with index finger and thumb, and shaking my head back and forth, ... while repeating, "aghvor aghchig" (nice girl) ....

"At the center of the Sunday gatherings was food. Both ... [nannies] were accomplished cooks, and set what my mother would call 'a beautiful table' ....

"There was a large picture hanging on the wall, in both nannies' homes, which showed the figure of a woman, sitting wistfully with her head resting in her right hand, in what looked like a graveyard .... This picture, ... was prominently exhibited ... in most Armenian homes ....During these Sunday dinners, the nannies, as well as my mother, would end up in tears. They looked remarkably like that figure of Mother Armenia, weeping."

Town Meeting
Why I support Article 43 I support Article 43 because ADUs can make a small but meaningful contribution to Arlington housing. I was really pleased to read Pam Hallet and the HCA's endorsement of Article 43  last week. It's great to hear that several units of permanently affordable housing would be one impact of this proposal. I also believe that Article 43 is well crafted to help support families looking for multigenerational living situations. But before I address the parts of the proposal...
Read more