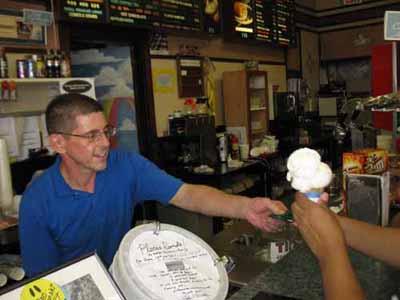 Steve Kupelnick serves up a large cone in the Heights.

Out with the Brig, in with the Dig

A warm, lazy, sunny Friday afternoon in August can't lie: You know summer ends soon, and you hunger for an ice cream ... one from Brigham's.

You head for the Heights, where the last ice cream spot with that name is trying to hold back time with a lime rickey.

But what's this? The sign in bubbly, blue, late-'60s lettering says, "Digumms."

What's a townie to do? When will all this change stop?

Ask Steven Kupelnick. He's been running the shop at Mass. Ave. and Park with partner John Mercer since 2001.

Similar to a new flavor in 2013, the name change was ordered, and it's finally happening. Kupelnick helps the truth goes down like one of the rainbow sherbets he serves.

Temporary banners went up Aug. 7; the permanent signs are due after Labor Day.

"We're still planning a grand opening," he said while he and staff fielded a steady stream of customers.

The news was like hearing two old Moody Blues hits that can be confused -- "I Know You're Out There Somewhere" and "Your Wildest Dreams."

The former song plays off that long, lost love who returns to haunt your memory.

The latter calls up the mad detours of longing.

Perhaps the frappe was wicked.

A bit of history

Amid wild dreams and searching, customers lust for a cool moment, and Kupelnick took quick breaks to explain. So did a 2013 Boston Business Journal story hanging on the wall.

Titled "BRIGHAM’S: LAST SCOOP," it explains that HP Hood, the Lynnfield-based owner of the Brigham’s brand and its supermarket ice cream business, asked the last four independently owned Brigham’s restaurants to drop the name by the end of May 2013 as it ended production of bulk ice cream.

Three --in Quincy, Hingham and North Andover -- followed orders. Mercer, the Arlington co-owner, told the publication that he did not yet have a name and couldn't afford the sign change.

"We are going to try to sell off everything with the Brigham’s name on it," he said in 2013. "Some people are interested in the memorabilia.”

A recent visit showed that Brigham references remain -- near a sign on a back wall that says "no public restroom" is a "B" in Brigham lettering. To the left, as you come in the door is a "Brigham's Party Center," a cold case with Coke and other drinks.

No matter. As the owners await the permanent sign, Kupelnick answered the crucial question, "Why Digumms"?

Under discussion for some time, the 51-year-old said the new name carries the implication of "digging into" a sweet treat while keeping the sound of the old name.

He said the name is not intended as a “dig" at Brigham.

Kupelnick said the ice cream he sells is similar to Brigham's. It comes from Sugar Maple Cremery, which he said was based in Pennsylvania, and is linked to Por-Shun, Inc., a distributor in Wilmington, Mass.

"Sugar Maple premium has the richness of Brigham's," he said. "The same recipe is used."

Kupelnick's connection to selling ice cream dates to working with his father, Jack, at the Brigham's at Trapelo Road and Belmont Street, Belmont, until it closed in January 2012. He has been at the Heights store since 1988.

Quarts of Brigham’s continue to be sold in supermarkets, but the Brigham’s experience is soon to change for good in Arlington.

A 1971 sign at the rear of the shop reflects the "bubble" lettering reflecting the new name. In that sign, which includes a Brigham image, a sundae is 65 cents.